Caribbean Magazine Plus and Arawak Media are launching their second Annual Short Story Competition.
Dr. Nicola Hunte, lecturer in English at the University of the West Indies Cave Hill campus has agreed to return this year as lead evaluator, bringing the contest the quality assurance we appreciate.

Dr. Hunte is a lecturer in the Literatures in English discipline at the Cave Hill campus of the University of the West Indies. With her interest in the creative arts, she serves as the editor of POUi, Cave Hill’s journal of creative writing as well as on the Frank Collymore Literary Endowment committee for the promotion of literary arts in Barbados.

She has published in the area of literary criticism on Caribbean and African American texts in Shibboleths, an online journal of comparative theory, and the Journal of West Indian Literature (JWIL). Her critical work has also touched on popular culture, specific to Barbadian expression on and offline. Her research focus includes the critical texts of
Guyanese writer/theorist Wilson Harris and speculative fiction, particularly from the Caribbean and the African cultural diaspora.

The link for submissions to the short story competition will go live this Friday, September 16, 2022, and contestants will have until January 20, 2023, to submit their entries.

This short story competition is open to all persons of the Caribbean and Central American
diaspora. Information on eligibility will be provided this September 16, 2022. 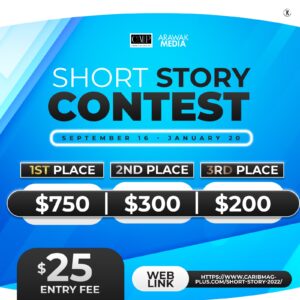