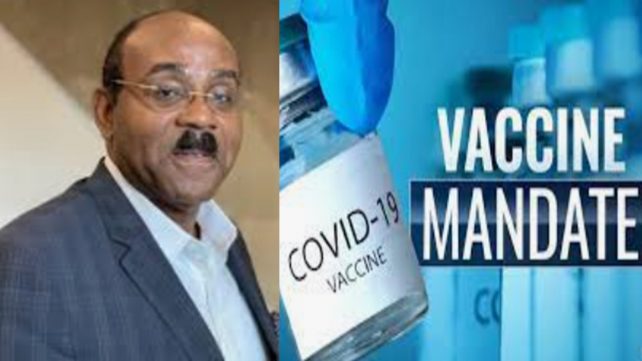 The Gaston Browne led administration in Antigua and Barbuda is under pressure from unions and public sector workers, after its vaccination mandate last week.

According to the regulation, all government employees, including teachers, must get vaccinated by October 1 or remain at home unpaid for the period in which they fail to comply.

In fact, there are hundreds of public sector workers who are currently at home since they are not vaccinated.

This is due to the fact that an unvaccinated employee who attends work would be in violation of the Public Health Act (Dangerous Infectious Disease) (Amendment) (No. 16) rules 2021, and would be subject to a $500.00 fine or imprisonment for up to one month.

Browne said he will hire other vaccinated people to replace them.

So far, three workers unions in Antigua and Barbuda have sought legal counsel in an effort to challenge the government’s vaccine mandate.

That union is petitioning the court for Judicial Review of the Government’s policy and changes to the Public Health Act (Dangerous Infectious Disease) Regulations, arguing they are arbitrary, irrational, and disproportionate, among other things.

The association is also requesting that the policy be “stayed” until the case is resolved in the High Court.

The Antigua and Barbuda Trades and Labour Union (AT&LU) on the other hand said it had received legal counsel and has begun the process to challenge the Government’s Mandatory Vaccination Policy, but encouraged its unvaccinated members to stay at home until the matter was settled.

And the Antigua and Barbuda Workers’ Union (ABWU) stated that it will continue to study and debate the issue of forced vaccination “with our legal representatives in order to pursue any viable legal challenges.”

All this comes as the Freedom Fighters of Antigua and Barbuda is planning a major protest, challenging the latest policy.