Public officers have been advised to stay home today and tomorrow as the Dominica Public Service Union (DPSU) embarks on industrial action over salary negotiations with the government.

Speaking to reporters after the meeting, General Secretary Thomas Letang would not confirm or deny that decision.

However, Dominica News Online (DNO) was able to independently confirm that the decision was taken on Tuesday afternoon at a DPSU meeting which was held to update members on the status of salary negotiators.

The DPSU said last week that it is not satisfied with the pace at which salary negotiations with the government, is progressing after five meetings.

The mood was one of defiance and protest when public officers gathered at the Dominica Public Service Union (DPSU) to hear from their executive and chart the way forward on salary negotiations.

General Secretary of the DPSU Thomas Letang and his executive have been in a battle with the government over salary increase and other benefits for public officers and revealed that the government’s offer for the triennium under negotiation is “zero, zero, and zero” which the union flatly rejected. 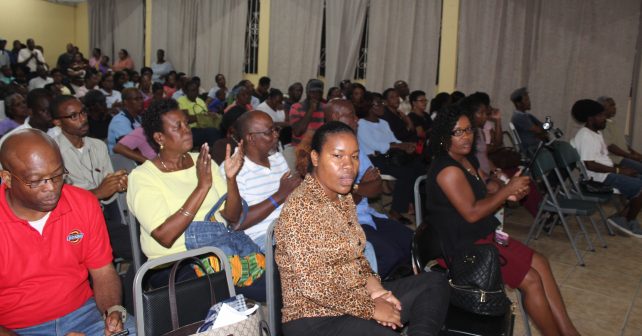 In an address punctuated by loud cheers and applause from the large crowd in attendance, Letang said that with God’s grace and their own hard work, and dedication, they shall overcome.

“The struggle for freedom has just begun…we can do one of two things: we can swim together and be saved or get drowned separately…we cannot be distracted in our pursuit for a just and reasonable salary increase and for improvement in other working conditions,” he said.

The DPSU boss continued, “And so, we must continue to hold that thought. Victory, I say is ours, I repeat. Victory is ours and so let’s not lose sight of that victory and allow it to crumble and fail. My brothers and sisters, what we do today, will decide what our fate is tomorrow. I ask you to put aside all partisan political interest and let us look at our own interest.”

Letang added, “Others fought for us; now is the time for us to fight for ourselves and let us fight for those to come behind us. Let us think wisely and traverse the gulf of fear and tyranny cautiously and boldly,” he urged. “Solidarity, united, I believe we are going to succeed, now is our time, and now is the time for action and to move forward. Whatever we miss today will be gone tomorrow let us stand together and take decisions that are in our best interest.”

The meeting then went into closed-door discussions which were heated as they tried to arrive at a decision. It was then put to the members that effective November 20 and 21 public officers should embark on “a two-day sickout” and report back to work on Friday, November 22 and then assemble at the union’s headquarters at 4:30 pm.

That decision, DNO has learned, generated a lot of heated debate and discussions but when it was put to the floor for voting, members all agreed.