From July 29 to 31, 2022, Dominica’s very own cadence-lypso will be on full display at Windsor Park Stadium, as three of Dominica’s big-name cadence-lypso artists will be honoured for their contributions to the genre.

Speaking during the media launch of cadence-lypso month which will run from July 1-31 2022, the Founder of Creole Heartbeat- the organizers of this initiative- Leroy Wadix Charles, said the headline event for this year’s celebration will be the cadence-lypso tribute festival at the end of the month.

Night one, July 29, will pay homage to the Midnight Groovers and will feature other acts such as Stéphane Ravor, First Serenade, Pato (Black Roots), Loster, RSB, White Fayrie and the Sixth Form Sisserous Singers.

On night two, which will be a tribute to the late Jeff Joe, the crowd will witness performances from Luc Leandry, Dominica’s Lady of Song, Ophelia, Curvin Serrant, Linford John, Ecstasy Band, Chris B and the Cadence All-stars.

Night number three – July 31- will be a tribute to Fitzroy Williams and attendees will be entertained by Williams himself along with King Dice, Signal Band, Derrick Peter, Janet Azzouz, Gilles Fontaine, Jerry Lloyd and the Cadence all-Stars.

Meantime, Co-Founder of Creole Heartbeat, Jerry Williams, noted that the month of activities was created to celebrate the legacy and growth of the music and “to find ways to both relive some of the existing moments of that successful period of Dominica’s music, as well as to find collective ways to identify current gaps that allow for an imagination of a successful Dominica music industry.”

According to Williams, “In 2021, We focused on the history of the music to provide a full understanding of the impact this music had nationally, regionally and internationally. This year 2022 coming out of the pandemic, we want to use cadence-lypso to unite us as a people. We want to invite families and friends to Dominica, grandpa, mommy daughter, grandpa, grandma, Daddy’s son, come and  enjoy that music that unites us, make this a three-generation vacation, make this a three-generation line.”

On July 1, the month of activities to celebrate one aspect of Dominica’s culture will officially kick off at the National Development Foundation of Dominica Ltd. (NDFD) Marketplace (in front of the company’s building).

On July 2, the Legends Dance Party at the Anchorage Hotel, hosted by Dr Miguel Labadie, will also form part of the opening activities for the month as well as ‘Homage to Cadence -Lypso’ on July 9 at the Fort Young Hotel, featuring Dominica’s Princess of Song, Michele Henderson.

Williams revealed that another major highlight of the month will be the Cadence -Lypso Summer Camp for Children aged 7-15.

“We’re doing two weeks of summer camp that would entail arts and crafts, Creole language. masterclass, sports. One of the highlights would be we’re going to visit the Geneva estate and we’ll also be paying a visit to Chubby and Co to give them an experience of the culture itself…and then, on the last day, we’re doing a display at Cadence Square,” he said.

Another significant activity for the month will be a short story competition on ‘How I discovered Cadence-Lypso Music,’ where a 500-dollar prize will be up for grabs.

July 29, has also been dubbed Cadence-Lypso Day and a series of activities will be held to promote the genre.

For more information on the month of activities or to purchase tickets to the various events, the public can contact the organizers at email: creoleheartbeat@gmail.com, telephone numbers  767-616-3457 or 316-3457 or visit the Val Ferry office. 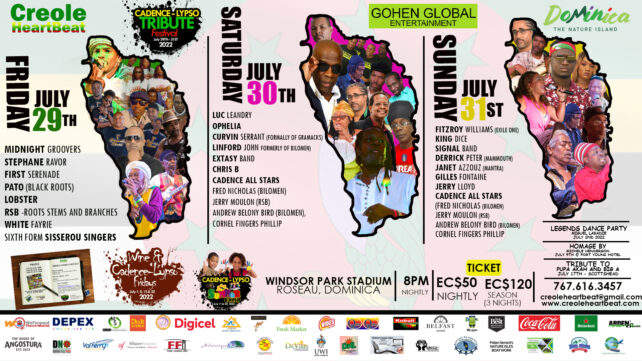