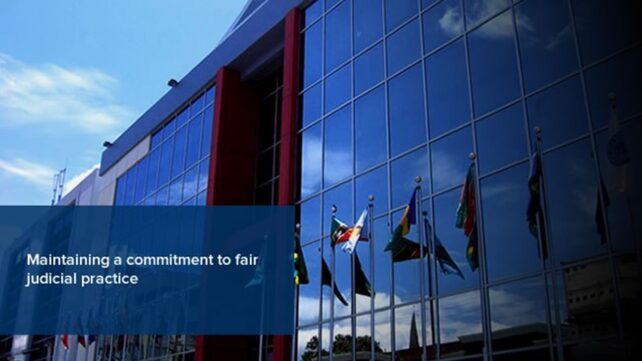 These are the two takeaways from the July 05, 2022 decision of the Caribbean Court of Justice(CCJ). The two seminal statements of the Court are contained in what it described as;

“In conclusion these appeals have been dismissed on the basis of want of jurisdiction, because there was no final decision or order made by the judge for the purposes of ss40(6) and (7) of the Dominica Constitution. However, there remain areas of grave concern about how the process of these elections was conducted. Future elections in Dominica ought not to proceed with these or similar taints.

For my part, in relation to the election lists issue and the related preliminary conclusions of the trial judge on the pleadings as to unlawfulness, the Court of Appeal  arguably may have had jurisdiction on constitutional grounds irrespective of whether the decision was considered, in the contexts of ss40(6) or (7), final or not. There can be no doubt that this particular decision conclusively pre-empted any further inquiry into arguably unlawful conduct by election authorities that potentially went to the root of free and fair elections”.

This scathing admonition by the CCJ of the 2019 Dominica general elections, has its roots in ten election petitions filed in the High Court by losing candidates of the opposition United Workers Party in those elections. All ten petitions were struck out by justice  Glasgow in response to applications made by lawyers for Labour Party candidates, Prime Minister Roosevelt Skerrit and several election officials. Glasgow’s decision was up held by the Eastern Caribbean Court of Appeal on the grounds that it was an interlocutory rather than a Final Order. The petitioners, through their Attorney Zahidha James of Inn Chambers out of Barbados,  approached the CCJ for special leave to appeal the decision of the CoA.  Lawyers for the respondents urged the Court not to hear the matter since, according to them, the CCJ had no jurisdiction to grant such leave.

Eventually the CCJ dismissed the application of the petitioners for special leave and upheld the orders of the Appeal Court. Significantly, no order was made as to costs.

The respondents’ lead lawyer, Anthony Astaphan, hailed the CCJ’s decision as a huge victory. The matter was dead and we should move on, he said.

Not so fast was the response of attorney James and Opposition Leader Lennox Linton, among others, who paid attention to the far-reaching and erudite observations and comments of Justices Saunders(President) and Jamadar on behalf of the CCJ.

The CCJ indicated, in paragraph 108 of its judgment, that the 2019 elections in the Commonwealth of Dominica were tainted and urged that future elections should not proceed with these or similar taints.

The CCJ also stated(para.109) that the “draconian” decision of trial judge Glasgow to strike out the petitions pre-empted further inquiry into arguably unlawful conduct by the election authorities that potentially went to the root of free and fair elections.

The CCJ said (at para. 88) that the matter of the patent non-compliance with s17 of the Registration Act ought to be investigated.

Attorney James did not mix matters in expressing her view that, based on the CCJ’s pronouncements and her own observations, the current Dominica government is illegitimate!

The question has been asked ‘why did  Dominica’s highest court feel obliged to make the observations and give the direction that it did?’ It is interesting that the justices laid out in their judgment details of all the complaints made by the petitioners. They must have known, at the time of considering the application for leave to appeal the CoA’s decision, that they had no jurisdiction. They however took the opportunity to see and hear the arguments of both sides. The scenario which emerged from this exercise was most TROUBLING for the Court. They said so!

The picture was one in which laws were broken; precedents were ignored; evidence was demanded contrary to the rules and even when the respondents admitted to corruptly paying airfares for thousands of voters, the judge turned a blind eye.

The CCJ must also have noted the attitude and actions of the Dominica authorities with respect to decisions and matters before the various courts.

The ‘no law, including the Constitution’ mantra, is well known.

The intervention/direction by a well-known Senior Counsel and chief advisor to the government in derailing electoral reform is also a matter of wide public knowledge.

The Labour Party administration dissolved the Integrity in Public Office Commission resulting in the discontinuation of a matter in which the Prime was at the time before the Court for alleged breach of the IPO Act.

The CCJ, having directed that a criminal complaint of treatment in the 2014 election campaign involving fifteen ministers of government should be tried in the magistrate’s court, saw its direction upstaged by the Director of Public Prosecution discontinuing the matter at the request of the accused ministers.

To crown this all the Attorney General of Dominica, Levi Peter, has now demanded that the Honourable Justices of the Caribbean Court of Justice should withdraw their “Gratuitous” remarks.

Oh justice, thou hast fled to brutish beast and men have lost their reason!!