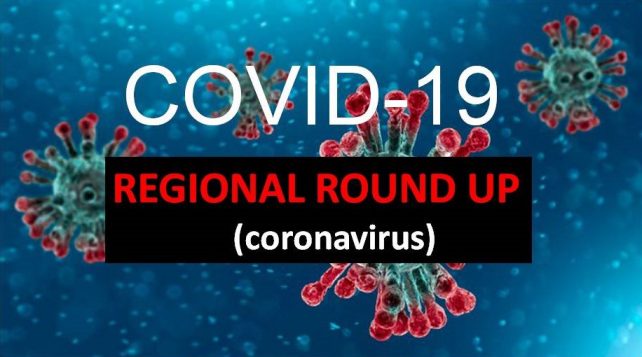 A Roundup of Regional Coronavirus headlines

SEVENTEEN PERSONS CHARGED FOR VIOLATING CURFEW (antiguaobserver.com). Seventeen people will appear in court this week charged with curfew related violations. Apart from these arrests, Commissioner of Police Atlee Rodney said that ‘by and large, persons are generally complying to the directives of the curfew…. So far things have been relatively quiet.’ Prime Minister Gaston Browne warned that the nation had not reached its peak in infections and that the current situation would last ‘for a longer period to protect lives’. Over the weekend, six new cases were confirmed bringing the total of recorded active cases to 15.

NO NEW POSITIVE CASES (visitaruba.com). The number of active COVID-19 coronavirus cases in Aruba is currently stable at 63 with 869 people having been tested so far, and 381 still in quarantine. Two people are in intensive care. One person has made a full recovery and there have been no deaths due to the virus.

WIDER LOCKDOWN MEASURES ANNOUNCED (thenassauguardian.com). Prime Minister Hubert Minnis announced stricter measures in an attempt to contain the COVID-19 virus, including a five-day lockdown from this Wednesday evening, and a complete shutdown on every weekend in April. Five deaths, including that of two doctors, aged 67 and 72 respectively, have been recorded. There are 20 active cases.

BARBADOS RECORDS FIRST COVID-19 RELATED DEATH (loopnewsbarbados.com). Minister of Health Jeffrey Bostic said the deceased is an 81-year-old Barbadian male who travelled to the UK and returned to the island on 22 March. Both the deceased and his wife were tested on 4 April after reportedly exhibiting symptoms of the virus. The deceased was a diabetic and his condition ‘deteriorated rapidly’ after being admitted for care. Barbados has reported 49 active cases of COVID-19.

TWO ARRESTED FOR ILLEGAL ENTRY, LOCAL CHARGED WITH ‘SMUGGLING’ (bvinews.com). Two people, one from the BVI and the other from the neighbouring USVI, have been charged with being engaged in smuggling, illegal entry and breaking the curfew, following the interception of a vessel entering BVI waters. It is not known whether other people were on board. There are three reported active cases of COVID-19.

PLEA FOR UNITY AS LAY-OFFS LOOM AND BUSINESS SECTOR CONTRACTS (caymaniantimes.ky) Minister of Health Dwayne Seymour said he will investigate reports of discriminatory lay-offs in the business sector. ‘We have been hearing reports that some businesses  have been laying off Caymanians first and retaining their work permit holders.’ The first case of COVID-19 has been reported on Cayman Brac, one of the three islands that make up the British Overseas Territory; observers are particularly concerned because of the elderly age of its 2,000 strong population. Meanwhile, Governor Martyn Roper said at the weekend that a private aircraft was due to bring 200,000 COVID-19 testing kits from South Korea; he hoped the kits would arrive ‘within the next week’ (caymancompass.com). Thirty-seven active cases have been reported.

CUBA WILL DISTRIBUTE PREVENGOVIR, NEW MEDICATION TO PREVENT COVID-19 (plenglish.com). Cuba will shortly begin distributing the homoeopathic immunological booster PREVENGOVIR among the island’s population to help prevent viral infections like COVID-19 and other common flus, Dr Francisco Duran, Director of Epidemiology, announced on Sunday. He explained that PREVENGOVIR is a sublingual preparation which has already been given to risk groups in isolation centres, elderly and mother-infant homes, and hospitals caring for positive and suspected COVID-19 patients. Cuba has reported 323 active cases of the virus.

TWO MORE TEST POSITIVE (curacaochronicle.com). Epidemiologist Dr. Izzy Gerstenbluth confirmed this morning that two positive tests have been added to the COVID-19 cases in Curaçao. This makes a total of 13 cases so far. One person has died, one case is inconclusive – meaning that the test results have not led to a firm conclusion – seven are reported as active cases, and five people have recovered from the virus. ‘If we do not adhere to the measures, there is a good chance that more infections will be added. If we don’t want to see an increase, we must keep this up for a while. If we come through lockdown through these weeks, we can see how and if we can relax the measures,’ said the doctor.

DOMINICAN GOVERNMENT EXTENDS SOCIAL DISTANCING PERIOD (dominicantoday.com). The Minister of Public Health, Rafael Sánchez Cárdenas, reports that the numbers of those infected with the coronavirus COVID-19 have increased to 1,828. In a press conference broadcast online, the minister said that fatalities had increased to 86. Currently, there are 1,709 active cases, 86 have died, and 33 have recovered. The country’s curfew was extended by 15 days and only essential travel is permitted to the interior of the island.

REPATRIATION FLIGHTS (nowgrenada.com). The US Embassy in Grenada and Seaborne Airlines/Silver Airways have worked together to facilitate two flights from Grenada to San Juan, Puerto Rico, which were due to take place on  Monday 6 April for the purpose of repatriating US citizens. Grenada has reported 12 active cases of COVID-19.

AS CORONAVIRUS CASES GROW, CALLS FOR RAPID TESTING AND MEDICAL GEAR IN HAITI GO UNANSWERED (miamiherald.com). The French Hospital of Haiti announced that, after more than 100 years of providing medical care in the capital, Port-au-Prince, it will shut down its emergency room and stop admitting patients as of 1 May. The hospital’s medical director, Dr. Jean Venèse Joseph, said the final straw was when it took government officials 48 hours to test a 70-year-old patient with pneumonia for COVID-19, and staff realised they had neither the equipment nor medical gear to confront the disease. ‘You can imagine the panic that took place inside the hospital,’he said in a telephone interview from Port-au-Prince. ‘We realised that we are not prepared to confront the reality that exists.’

Haiti’s official statistics tell a troubling story. The nation of 11 million has so far only tested just over 200 people for the deadly coronavirus and has 23 confirmed active cases. Dr Franck Généus, the head of the country’s association of private hospitals, said the decision by the French Hospital is a sign of things to come if ‘the government doesn’t get its act together’, reported the Miami Herald. He has publicly accused the ministry of not doing enough to involve private hospitals in its COVID-19 response plan. “In two, three weeks, the health care system in Haiti will be brought to its knees,” Dr Généus said.

PASTOR CHARGED WITH BREACHING SOCIAL GATHERING BAN (jamaica-gleaner.com) A pastor from St Catherine was charged with breaking the social gathering ban, which limits the numbers allowed to gather to a maximum of 10 people when police were called to a church service where more than 50 people were in attendance. If found guilty, the pastor could face a fine or one year’s imprisonment. Jamaica has 47 reported active cases.

FINES FOR OUTINGS TO BEACH AND SWIMMING (martinique.france-antilles.fr). Four hundred people were fined for going to the beach at the weekend, thus breaking the ban on beach access and swimming. ‘Citizenship is a key to this fight,’ said a spokesman. There are currently 95 active cases on this French Overseas Department.

PUERTO RICO DISCOVERS PROTECTIVE SUPPLY CACHE AMID COVID-19 (washingtonpost.com). The suspected mismanagement of essential supplies during Hurricane Maria has turned out to be a boon for Puerto Rico as it fights a rise in coronavirus cases. Health Secretary Lorenzo González said on Saturday that officials had discovered a cache of urgently needed personal protective equipment at a hospital on the island of Vieques that remains closed since the hurricane hit the US Territory in September 2017. He said the equipment includes face masks, gloves, gowns and face shields that are in good condition and would be distributed to health institutions. He also said that officials had recently located a warehouse with medicine and medical equipment worth $4 million donated during Hurricane Maria and that nearly all of it had expired. Puerto Rico has reported 492 active cases of COVID-19.

HIGH QUARANTINE NUMBERS REFLECT ROBUST MEASURES (sknis.kn) The Minister of Health Dr Hazel Laws said that 249 people are in quarantine and that this “robust approach” is an attempt to flatten the curve of Corvid-19 cases. The Cuban team of health specialists who arrived last week are also in quarantine. Prime Minister Dr Timothy Harris has praised the islands’ health workers for caring for those who have tested positive. The reported number of active COVID-19 cases stands at 10.

HELP! ST LUCIANS STRANDED ON CRUISE SHIPS (stlucianewsonline.com) An unknown number of St Lucians are reportedly stuck on cruise ships after countries worldwide closed their ports due to the coronavirus outbreak. A St Lucian with ‘friends and relatives working on some of those ships told St. Lucia News Online on Monday that it is believed that ‘hundreds’ of St Lucians are among the thousands of Caribbean nationals trapped on these ships. ‘Many of those vessels have corona and crew members are in isolation in the rooms. Many of them have said that they feel like they are in prison. Others claim while the company tried making plans to send them home, St Lucia closed its borders, the source said. St Lucia has reported 13 active cases of COVID-19.

BUS OPERATORS BE WARNED – LICENSE GIVEN BY THE STATE CAN BE TAKEN AWAY (news784.com) Following the imposition of new public transport rules (max nine people per bus), Prime Minister Ralph Gonsalves says that although many operators are complying, there are a number of still putting commuters lives at risk. He urged bus operators to comply with the rules to avoid the government having to use a heavier hand. St Vincent has reported six active cases of COVID-19.

UNC MAKING ‘COVID19’ MASKS (newsday.co.tt) Leader of the opposition Kamla Persad-Bissessar has announced that the United National Congress (UNC) is “mobilising seamstresses and tailors” to make masks for the public. She said the UNC were asking for donations of cloth and elastic bands. On Sunday, the Minister of Health recommended the public should use face masks to reduce the spread of Covid-19. Earlier, the government said that it would be distributing cloth masks by the end of the week. Restaurants are to be shut down from Tuesday, it was announced on Monday amid a row raging as to why streets vendors selling food such as “doubles” had been shut down while fast-food outlets had remained open. Prime Minister Dr Keith Rowley expressed his concern that who could sell food had become a matter of “ethnic exploitation”. The twin-island state has 96 active reported cases.

HEALTH DEPARTMENT ANNOUNCES FIRST CONFIRMED DEATH OF COVID-19 ON ST THOMAS (doh.vi.gov). An 85-year-old man, who died at home, became the first death on the USVI attributed to the COVID-19 virus. He had had underlying health problems. There are 41 reported active cases on the US Territory.

N.B. The chart below shows active COVID-19 cases so that patients who have fully recovered are not included. 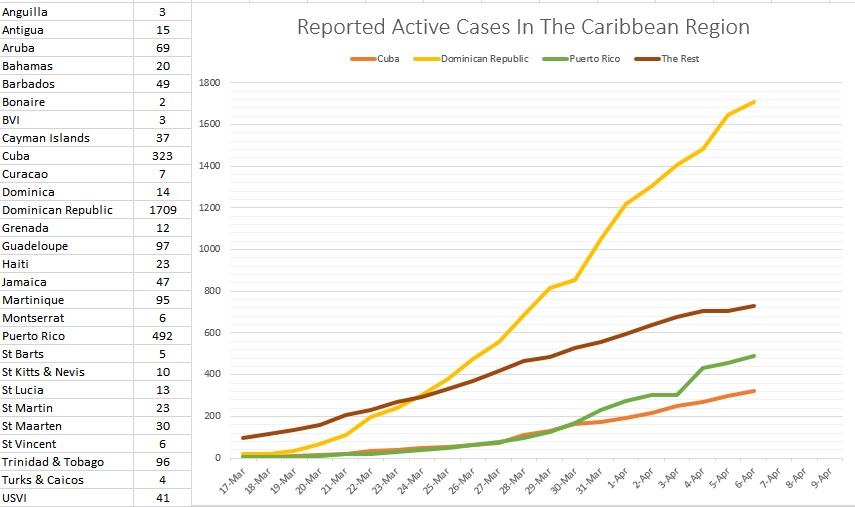 Click here for the latest global numbers on COVID-19.