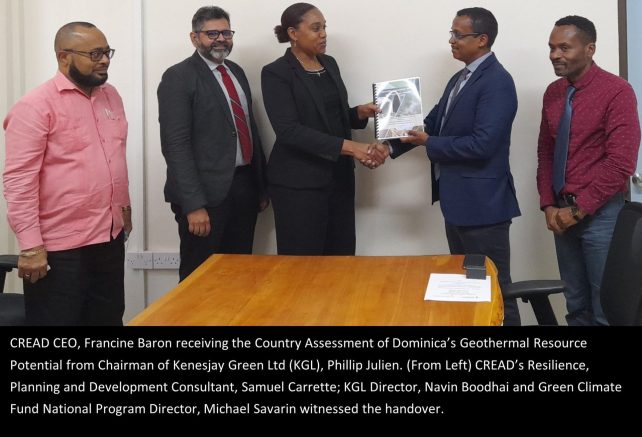 A country assessment of Dominica’s geothermal resources has been handed over to the Climate Resilience Execution Agency of Dominica (CREAD).

The assessment, which focused on creating a roadmap for the utilization of Dominica’s geothermal resources to build a resilient economic future for the country, while supporting regional and global low-carbon energy transition, was conducted by the Kenesjay Green Limited (KGL).

This assessment followed the groundbreaking signing of a Memorandum of Understanding (MoU) at the Climate Change Conference (COP26) event held in Glasgow, in which CREAD and KGL established a working partnership to facilitate the collaborative development of Green Industrial Eco Parks (GIEP), green hydrogen production, carbon sequestration, and the decarbonisation of industries.

Speaking during the handing over ceremony this past Friday -April 8th- CREAD’s Chief Executive Officer (CEO) Francine Baron, said the report will complement the work that the Government has already been doing in the geothermal space, with the ongoing efforts toward constructing the country’s first geothermal plant in the Roseau Valley.

“You would all be aware that Dominica is a geothermal resource-rich country and our geothermal resources provide tremendous potential for spurring Dominica’s green industrialization. This will support the diversification of our economy and lead to the achievement of a robust economy, which is one of the six result areas in our Climate Resilience Recovery Plan,” she said.

Baron noted that Dominica, along with much of the world, has made commitments under the Paris Agreement to make substantial changes to reduce greenhouse gas emissions, which she says is a sign that the world is transitioning from fossil fuels to cleaner sources of energy.

“Dominica has targeted 2030 to have 100% power generation through renewable energy. This will result among other things, in greater energy security, bolster our resilience and help us in achieving our Nationally Determined Contributions,” she said.

“There is now significant interest around the world in green hydrogen…Dominica has the unique opportunity to position itself to be able to supply some of that demand,” CREAD’s CEO added.

One of the projects that the Ministry of  Planning is working on with the support of the GCF, is the development of a Green Eco-industrial Park, and in the country assessment report,  Kenesjay Green has set out very clearly the sectors that will benefit from geothermal energy utilization.

These include the development of green ports and refueling hubs, sustainable agriculture, data processing in high tech facilities, green ammonia and derivatives, E-methanol and synthetic fuels and green eco-tourism.

“This creates opportunities for the private sector and for job creation in a  number of areas including engineering and environmental management services, logistics services, spatial planning, utilities management, just to name a few. We need to begin thinking of the skill sets that will be required and how we will acquire it,” Baron stated.

KGL has said that the results of the Country Assessment titled “A Green Industrial Development Model for Dominica with Focus on Utilisation of Geothermal Resources for Transitioning to a Hydrogen Based Economy,” will be used to create a country profile for industrialized renewable energy developments and identification of areas requiring special attention to make this opportunity a reality.

The output will guide the national green investment choices and prioritise the areas of intervention.

A revised version of the report is available below: