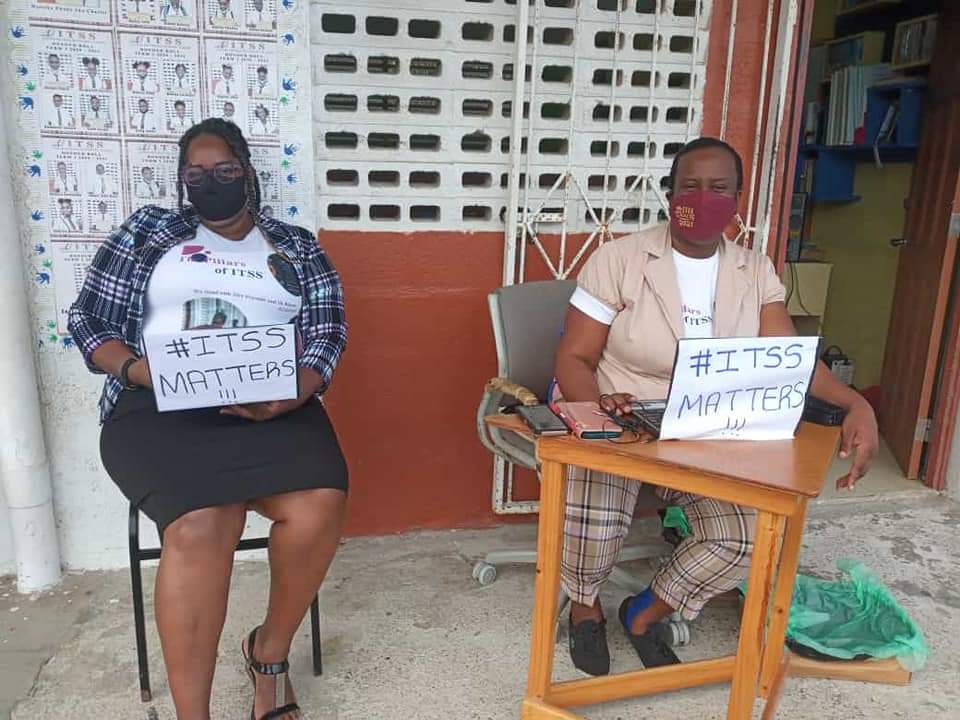 Teachers of the Isaiah Thomas Secondary School (ITSS) today took a decision to walk out of the classroom, to send a clear message to the officials that they are standing in solidarity with their colleague, former acting Vice Principal Kendra Roberts.

Last month, news broke that Roberts, who had been acting in the position for several years, was removed from that position which led to members of staff as well as parents, calling on the government to rethink that decision.

Frustrated over what they say is a clear form of victimization of their colleague, as well as the lack of response from the officials as to why Roberts wasn’t appointed to the position, this morning, the aggrieved teachers instead of being in the classrooms, sat outside of the schools’ office in hopes of getting their message across.

“Kendra has been the backbone of ITSS, and without her, I am not sure where this school would have been,” one of the teachers stated to Dominica News Online (DNO).

“We are doing this because the ministry has shown us that we are not respected as employees and we need to let the ministry know that without us, there is nothing that can be done at the school with the children so they need to learn to respect us at the school as well,” she added.

The educator went on to reveal that several letters have been sent to the education officials as well as other members of parliament to include the prime minister, but to date, they haven’t received a response.

Despite the police presence on the scene this morning, which teachers say was non confrontational, they vowed to continue their actions until they get a response from the officials.

However, the recent actions taken by the teachers have been met with mixed reactions from parents.

Ms Vidal, whose daughter attends the government school, believes that other actions, which would not have a direct impact on the students’ learning could have been taken by the teachers to get their message across to the officials.

“This has been going on for weeks; most of the time, the teachers don’t login into the zoom session, and we, the parents are left to wonder, what should be done,” she told DNO.

“I am not against them standing up for their colleague, but I believe that it is completely unfair that my child as well as many other students have to suffer as a result of it. Today many would have probably made a sacrifice to send their child or children to school only for the day to be wasted. At the end of the day, the teacher needs to look at the message which they’re sending to the students. It’s almost like they’re saying, when you don’t get your way in the working field, then don’t do the job,” Vidal added.

Another parent of a fifth form student took to Facebook to express her gripe over the situation, questioning whether the students’ education or the teachers’ concerns is the priority at the earning institution.

“I tried being very quiet about the whole itss story but when it starts affecting my 5th former, I will speak up… I have no problem with the staff wanting answers as to what happened but why do the children have to suffer? In this critical time, why are you the teachers applying more pressure to the students by not showing up to classes? What is ur {your} main goal at itss teaching or getting justice for the teacher? Does itss consist of only the staff? Where are the parents and students that are suffering as well? … ITSS TEACHERS WHO IS OF MORE IMPORTANCE THE STUDENTS OR THE TEACHER?” the upset parent asked.

However, other parents have taken to social media supporting the various actions taken and are themselves demanding that Roberts, who’s currently on leave, be reinstated as the school’s principal.

Comments such as “It was about time,”… “standing in solidarity with Miss Roberts”… “get her back”… “Justice for Miss Roberts” flooded social media from past and current students as well as parents throughout the day.

When contacted by DNO, the current principal Benedict Charles declined to comment on the matter.

DNO also attempted, without success, to speak with officials of the Ministry of Education including the Minister, the Permanent Secretary and Acting Chief Education Officer.