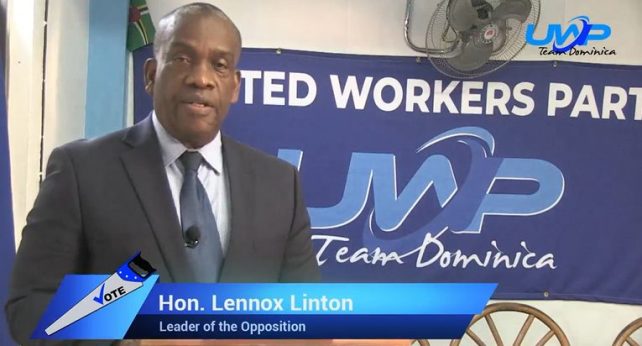 Less than a year after his re-election as the United Workers Party (UWP) leader, Parliamentary Representative for the Marigot constituency, Lennox Linton, has tendered his resignation as the party’s political leader.

This is according to several party officials who confirmed the news to Dominica News Online (DNO).

“Mr. Linton submitted his resignation letter to the President of the party (Isaac Baptiste) with immediate effect yesterday (September 30, 2022),” one source told DNO.

“I haven’t seen the contents of the letter,” stated another, “but he (Linton) is expected to give a public statement some time next week.”

Another UWP member stated to DNO that she spoke directly to Linton who confirmed his resignation and said that an official statement would be issued later.

Attempts made by DNO to speak to Baptiste and Linton were unsuccessful and the party’s Public Relation Officer (PRO), Glenroy ‘Soso’ Cuffy declined the opportunity to give a comment on the matter as according to him, “I haven’t seen the letter and the party needs to meet first before I say anything publicly.”

On December 12, 2021, Linton was re-elected unopposed as the political leader of the UWP, a position which he held since 2013, replacing his predecessor, Hector John.

With no official word from the party as yet, theories abound as to who will replace Linton as UWP’s leader.

With Linton’s resignation, Deputy Political Leader, Francisca Joseph, ascends to the position of party leader until that position is determined at the party’s delegates conference which, according to one UWP member, is due to be held in November this year.

DNO  will continue to follow this story and report any new developments.