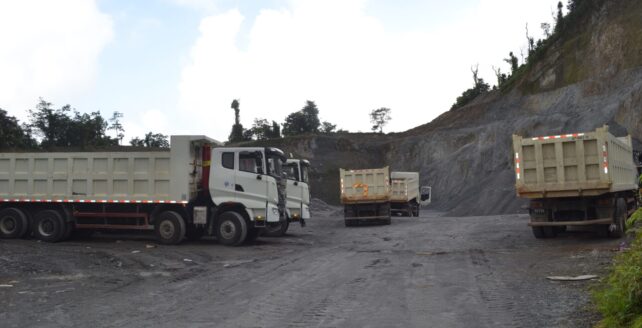 A four-day protest by local truckers to get over a quarter of a million dollars owed for their services, rendered almost six months ago, has yielded positive results.

At 6 a.m. on Monday, June 13, several truckers blocked the entrance to Dominica’s main tarish pit in Pont Cassé, preventing eight foreign-owned trucks from leaving and others from getting in. The truckers held their ground and were adamant that they would only move when they were paid the two hundred and fifty thousand dollars owed to them by the Chief Executive Officer (CEO) of Sotradom, Jacque Gaddarkhan, for work done on the East Coast road project.

Speaking to Dominica News Online (DNO), President of the Tipper Truckers Association of Dominica (TTAD), Anton Laville, reported that they met with Mr. Gaddarkhan yesterday, June 16, and were given a cheque for the full amount.

“He acknowledged that he had some shortcomings in his office and he’s going to make some improvements in that regard,” Laville told DNO.

In addition to the payment of monies owed, TTAD was also calling for local truckers to be allowed to work alongside Mr. Gaddarkhan who heads several local projects, which Laville says, the Sotradom CEO has agreed to.

“He gave us the commitment that he is going to reemploy us by the first week in July and thereafter, we will continue doing the project with him. He also gave us his word that he’s going to try his best to make payments in a shorter period, and we all agreed that the truckers should be paid no more than 60 days maximum after providing their service,” Laville stated.

During a live interview at the start of their protest action on Monday, the president explained that following a six-hour “awareness action” taken by local truckers in November 2021 under the Canfield cliff, to highlight the non-inclusion of local truckers in the construction of major projects on the island, their services were engaged earlier this year by Mr. Gaddarkhan for the multi-million dollar world bank project.

“From February of 2022, we started work with the gentleman and his company and some of our truckers worked for a period of three weeks. However, up to this date, we have not received any payments from the company,” Laville told DNO during that interview.

“For five months we have not gotten paid. Right now, the project is continuing, tarish is being hauled from the tarish pit and our trucks are parked. The banks are calling me in relation to the other truckers who are not paying their mortgage on their trucks and they even threaten legal action. So today, we decided to block the tarish pit and prevent any of the haulings and to get the attention of Mr. Jacque Gaddarkhan,” the veteran trucker added.

Laville also revealed that, with the assistance of the association’s lawyer, 13 letters had been sent to Gaddarkhan, but all prior attempts to get the monies owed, had failed.

Since the protest action began on Monday, the truckers were offered a partial amount, which they refused to accept. Several truckers also decided to sleep inside of their trucks as they remained resolute that they would not move unless all their outlined conditions were met.

The TTAD president expressed his gratitude to the general public and the police for the support that they showed over the past few days.