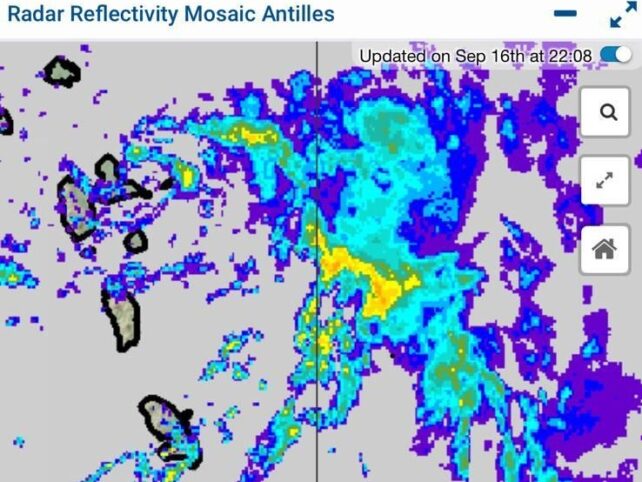 Unstable conditions associated with Tropical Storm Fiona are expected to continue affecting the area tonight and into the weekend. As a result, cloudy to overcast skies with periods of rain, gusty winds possible to tropical storm force, showers which could be moderate to torrential at times and scattered thunderstorms are expected as Fiona moves through the area, tonight and tomorrow.

At 5pm, the center of Tropical Storm Fiona was near 16.4 degrees north latitude and 61.1 degrees west longitude or about 60 miles NE of Dominica moving westward at 15mph with maximum sustained winds near 50mph. On this present track and forward speed the center of Fiona is expected to pass about 70 miles north of Dominica tonight. Tropical storm force winds extend 140miles NE of the center. Three to five inches of rain is expected with higher amounts in elevated areas a flash flood warning may become necessary tonight. A Tropical Storm Watch remains in effect for Dominica. People in areas prone to flood, landslides and falling rocks are advised to be on alert and to take the necessary precautions to protect life and property. Residents are advised to monitor the progress of Fiona and to make the necessary preparations for the possible impacts of this system.

Moderate to rough seas are anticipated tonight with waves up to 12ft. A gradual reduction in wave heights is predicted as the system leaves the area. Northerly swells are expected to impact the western and northern through eastern coastline. A Small craft warning remains in effect for above normal seas.  Small craft operators and sea bathers are advised to stay out of the water. People living near to or traversing coastal areas are also advised to exercise caution.