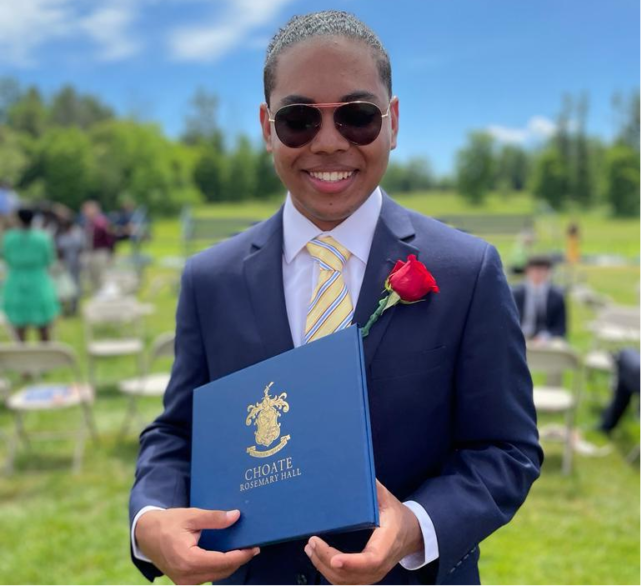 18-year-old Jarett Jean Jacques has graduated from Choate Rosemary Hall, one of the most prestigious and highest-ranked boarding schools in the United States, with the institution’s highest music award, the Hicks Lawrence prize for overall excellence in music.

Jarett entered Choate in 2019 on a full scholarship and a position as a Head’s Scholar. Jarett was selected during the admissions process by the head of school among ten of the most outstanding students in various disciplines for his academic and musical ability. He was able to participate in the unique programme called Arts Concentration. Despite the fact that first-year students are ineligible to apply for that programme, Jarett got in as a new student.

During his time at the school, Jarett was taught by professional musicians on trumpet, saxophone, and classical and jazz piano. He auditioned for most ensembles as extracurricular activity, winning the principal chair position in each. The ensembles included Symphony Orchestra, Wind Ensemble, Chamber Ensemble, Jazz Ensemble, and Jazz Combo. In addition, he also formed his own jazz band performing at school and other venues regularly. As a member of the Symphony Orchestra, Jarett performed at the John F. Kennedy Centre for the Performing Arts, one of the most frequently visited performing arts centres in the US.

He has since been accepted into the University of Rochester’s Eastman School of Music, a renowned conservatory, to pursue a Bachelor’s degree in Music Education on a full scholarship.

There is no doubt that Jarett will continue to excel on his musical journey and make his family and Dominica extremely proud in the years to come.

Jarrett is the son of Marlene and Norman Jean Jacques of Wall House.