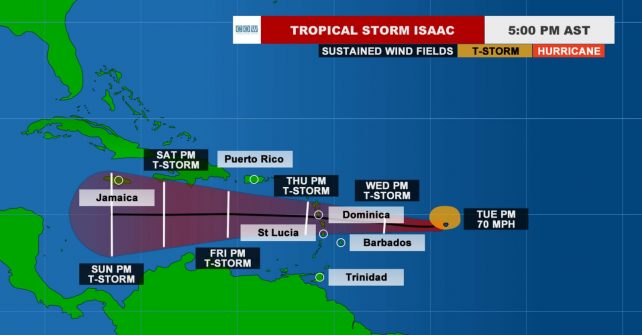 Hurricane conditions could be affecting Dominica within 36 to 48 hours as this country remains under a Hurricane Watch with the imminent approach of Tropical Storm Isaac which could again intensify to hurricane as it reaches this country.

Tropical-storm-force winds extend outward up to 105 miles…(165 km) from the center.

Current projections suggest that the center of Isaac is expected to pass over or near Dominica Thursday afternoon.
At this time there is still some uncertainty with respect to the intensity of the system. Although it is now classified as a strong tropical storm, some re-strengthening is “possible”, and it could become a hurricane again as it approaches the island.

Rainfall accumulations of at 4 to 6 inches (100 – 150 mm) with isolated higher amounts up to 10 inches in higher elevations during the passage of Isaac. Some flash-flooding and land slippage is likely. Thus, residents are urged to remain vigilant and take all necessary precautions.

In addition, large easterly swells of at least 4.0 to 6.0m (13 to 19ft) are also expected to affect the island from Wednesday.  Large waves and dangerous rip-currents are likely, which will create unsafe conditions for small-craft operators. Sea-bathers and other users of the sea are also advised to stay out of the water.

A Small-Craft Warning and a High-Surf Advisory will be in effect from 6:00 p.m, Wednesday 12th September, 2018 until further notice.

A small-craft Warning means in this case that surface winds greater than or equal to 25 knots and seas equal to or greater than 3m (10ft) are already affecting or expected to affect the marine area.

A High-Surf Advisory is issued when breaking wave action poses or is expected to pose a threat to life and property within the surf zone.

The next intermediate advisory will be at 8 PM with a complete advisory at 11PM.