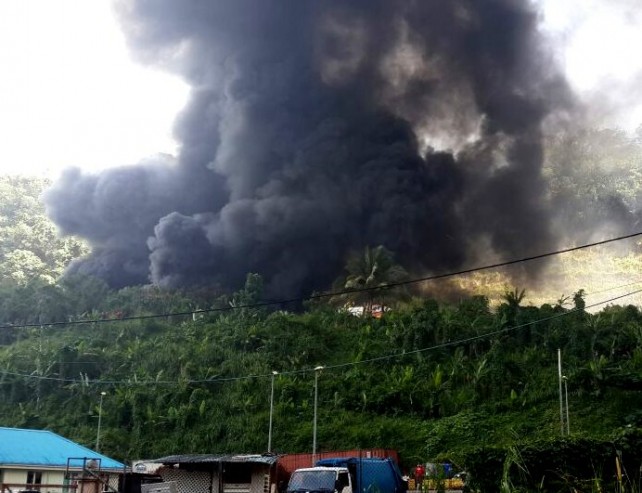 Fire Chief, Josiah Dupuis has commended, for “their hard work”,  fire officers who began attending to the Fond Cole Landfill fire from since 1.00 pm on Friday and throughout the night into Saturday.

The fire sent huge clouds of smoke billowing into the air and engulfing the surrounding area, including the Wood Bridge Bay Port where the Royal Princess Cruise ship was berthed. The ship had to make an early exit from the island.

“Up to this morning we have fire officers at the scene doing monitoring and management and for the most part, the fire is certainly more manageable,” Dupuis told Dominica News Online on Saturday. “I really want to commend the fire officers who were on duty and some who were off duty who came in to be of assistance to us and it really tells a story about the commitment of fire officers not just doing the job for doing it sake, but also just being committed to the ideals of our job.”

The Fire Chief also confirmed that some fire officers who were engaged at the landfill were taken to the Princess Margaret Hospital for medical examination as a precautionary measure, “being in an area like that for an extended period of time with the amount of fumes that they would have been exposed to.”

He also expressed his gratitude to several agencies such as the Office of Disaster Management (ODM), Local Government, Solid Waste Management Corporation, Environmental Health Department, the government and police, for their collaboration .

Dupuis said at the time of the interview with DNO, that the fire had been reduced to pockets.

“There is a lot less fire. In fact, reports have suggested that there are basically pockets of fire now, but as I said we continue to monitor the fire and there are a few initiatives on the way to try to deal with the pockets of fire to bring that situation to an end.”

When DNO’s reporter, along with personnel from another media house, arrived on the scene at about 1.30 pm, we were told by a top Solid Waste Management Corporation official that they were not commenting on the matter and asked not to take any “footage” since “everything is under control.”

But that did not appear to be the case as workers could be seen piling out of the gate and calling for the presence of the Prime Minister and the Minister for Health and it being Friday, requesting their wages as well.

Word on the ground was that the fire started with the burning of old mattresses by the Roseau City Council. However when DNO sought out City Council officials who were also on the scene, we were told that this is not true as it not the first time that they were bringing mattresses to the landfill and that they do not actually do any burning themselves. They argued that it was all a “cover up” and they were being used as scapegoats.

We asked Fire Chief Dupuis about the burning practices at the landfill and his response was that while there are concerns, he is now focused on bringing the landfill back to normalcy.

“I prefer at this point to focus on the situation at hand and not to comment and give recommendation about burning practices and so on. I think the most critical thing is for us to arrest the situation as it is and see if we can return the landfill to a state of normalcy,” he stated. “We have concerns obviously about burning but I would prefer not to comment on that right now and probably going forward we will be certainly be happy to engage the wider public, managers and employees of the Solid Waste on that matter.”

He said an investigation to determine the cause of the fire was ongoing and based on the assessment made thus far, the fire was being monitored and managed. He insisted that there was “nothing definitive” that the fire department could speak to at the time of his interview with DNO.