A fire, which occurred in Newtown on Tuesday night causing damage to two dwelling houses, is now under investigation.

Leading fireman, Michael Warrington told Dominica News Online (DNO) on Wednesday that the fire started in a building occupied by Damian Scotland at about 9:00 pm and then spread to another belonging to Leroy Stephen.

“We received the call about 9:0 0pm and we responded promptly…the fire broke out in a building nearby occupied by Damian Scotland, the whole building was destroyed by fire,” he explained. “The fire spread to another building belonging to Leroy Stephen and at least six family members occupied that home.”

According to Warrington, one bedroom and three windows were also destroyed at the Stephen’s house.

“The house was newly built,” he said. “The smoke also caused damage to the Stephen’s house and there is a lot of discolouration due to the extent of smoke.”

He pointed out that part of the building occupied by Scotland was a dwelling place while the other was a storage section.

A car parked nearby was discoloured because of the fire, Warrington noted.

“The car wasn’t completely destroyed but because of the intensity of the heat it got a lot of discolouration,” he noted.

Warrington revealed that the cause of the fire is unknown at this time.

Meantime he thanked the general public for their support and the Fire Fighters for a job well done.

“We want to highlight the work of our officers, we did a splendid job…we would like to thank the general public for their cooperation and support during that time,” he said.

No one was injured. 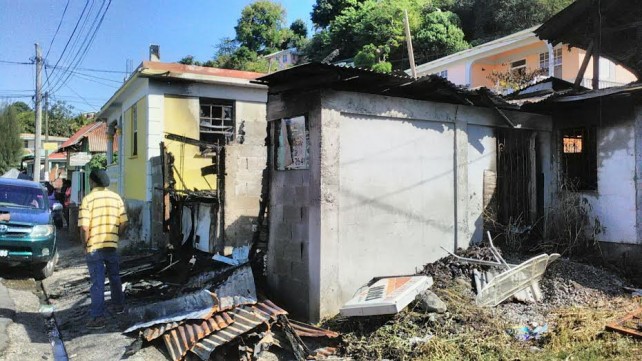 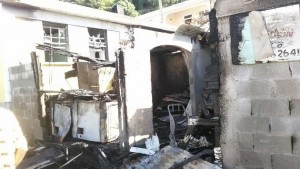