Two people have been injured in a traffic collision which occurred at about 7:00 o’clock this evening close to the Anichi Hotel at Picard, Portsmouth.

An eyewitness who was on the scene at the time of the incident, told Dominica News Online (DNO) that the accident occurred when a Mitsubishi SUV which was travelling in a northerly direction collided with a dump truck which had pulled up on the side of the road as it was experiencing mechanical problems. According to the eyewitness, the Mitsubishi also hit a Honda HRV which was travelling southwards in the opposite direction.

The DNO source reported that the driver of the Mitsubishi SUV and a passenger on the HRV were injured and were transported to the Portsmouth Hospital for medical attention. He said the driver of HRV escaped injury.

We will continue our efforts to get an official report from the police. 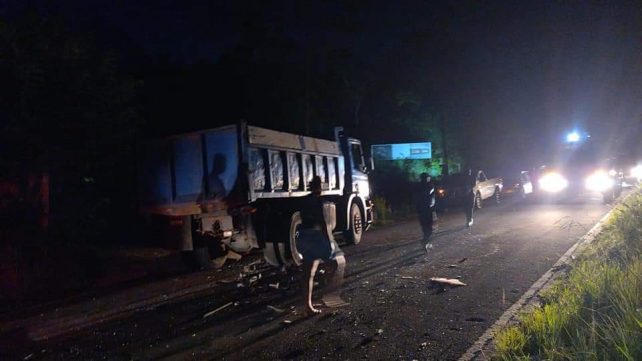