According to police PRO, Inspector John Carbon, the accident took place around 6:00 pm when 20-year-old Christel John of Montin Grand Bay was riding a motor scooter, registration number PJ069, on the Grand Bay public road with Twain as pinion rider.

He said she lost control of the scooter and collided with a concrete wall.

Both sustained injuries and were transported to the Grand Bay Health Center where they were treated and Christel was discharged.

Twain sustained head injuries and was transported to the Intensive Care Unit at the Princess Margaret Hospital where he died about 10:55 pm.

The matter is under police investigations, according to Inspector Carbon. 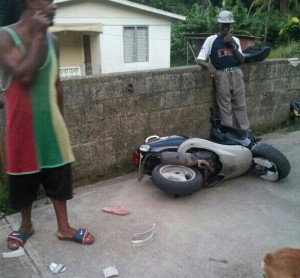