Two passengers were taken to the hospital for treatment this morning as a result of a vehicular accident. The accident occurred at about 9 am near the gas station in Canefield .

According to a DNO reporter at the scene, two passengers were transported to the hospital in a private vehicle, complaining of head and leg pains after a passenger bus slammed into a Dominica Electricity Sercvices (DOMLEC) utility truck, resulting in major damage to the bus. There was minimal damage to the utility truck.

The driver of  bus #HF163 which was involved in the accident, told DNO news that faulty brakes were the cause of the accident.  He said the tried applying brakes but could not get the vehicle to stop or slow down.  The bus was carrying passengers from the Wesley/Woodford Hill/Marigot area to Roseau.

A group of police officers in the traffic at the time assisted in clearing the road and ensuring that everyone was okay. 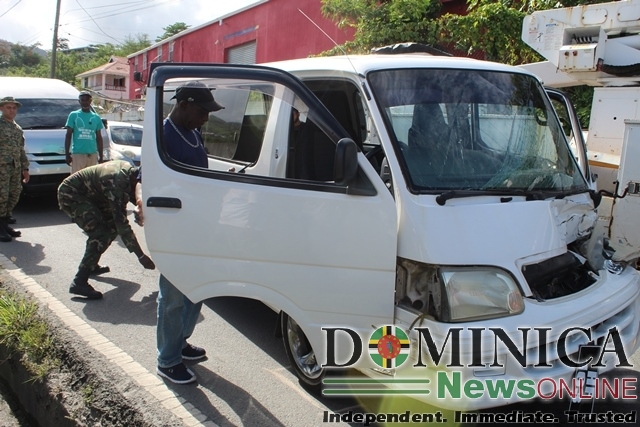