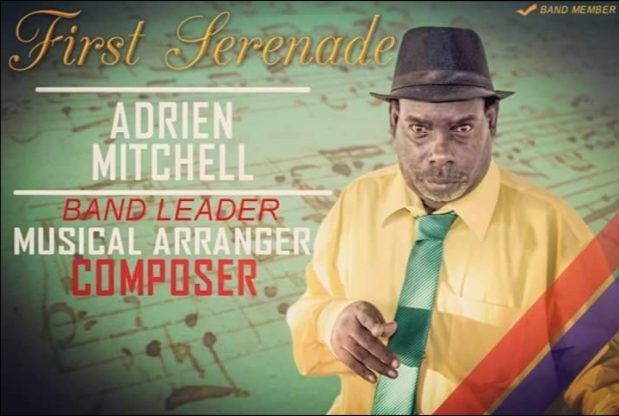 Even when he was too weak or in too much pain to hold the guitar, he remained absorbed in his music – sometimes filling the role of background vocalist during the First Serenade Band’s live sessions around the island or putting in hours at the studio and writing bouyon and cadence-lypso hits.

The late Adrien “Archie” Mitchel is being remembered not only for his friendly, jovial and humble personality but for his “exceptional” contribution to music in Dominica. He died at the Dominica China Friendship Hospital on August 10, 2021 after a years-long battling with renal failure.

Since the news of his passing, many have been sending messages of condolences and speaking of their fondest memories of the former First Serenade bass guitar player, and sharing links of his songs they loved most.

A founding member of First Serenade Band, Carlton Winston said he is convinced that the music kept Mitchel alive even after his renal failure diagnosis years ago, though adding that he did grieve for some time about being unable to perform the way he was used to.

Speaking to Dominica News Online (DNO) Winston, while extending condolences to Mitchel’s family said, “He’s in a better place. The pain and suffering is over.”

“The love of the music really kept him. He had taken a back seat, he was behind the scenes. He could direct the recordings for the band because we had gotten two other bass men to play in his place. He will definitely be missed by the band. It’s a loss for the band,” Winston stated.

Mitchel was not only known for strumming the bass but was an avid arranger, programmer, composer and zouk singer with the band for decades.

“He had a love for the music,” Winston said, adding that Mitchel, despite his illness, would follow the band wherever it went to play around the island and would even grace the stage with some vocals at various times.

“He could not stand up for four hours. His body couldn’t take it… He did his part. He couldn’t really play… the hand was giving him problems,” Winston remembered.

He recalled instances where they would have had to carry Mitchel from his home to the vehicle, the after effects of a broken leg which made it too painful to walk.

Mitchel and Winston had co-written a cadence-lypso tune which led them to their first Cadence-lypso Competition title in 2014.

Mitchel, who was also a recording engineer, extended his musical influence far beyond his involvement with First serenade recording for calypsonians such as Jaydee, Deros, Checko and thec late Akar. He was very instrumental in the recording of the serenade Old Mass Medley which is still going strong after over more than 20 years.

Local Facebook users including fellow musicians have been paying tribute to Mitchel for the last 48 hours, many speaking of his irreplaceable contribution to the bouyon and cadence-lypso genres in Dominica.

Adrien ‘Archie” Mitchel does lead vocals in the First Serenade video below.