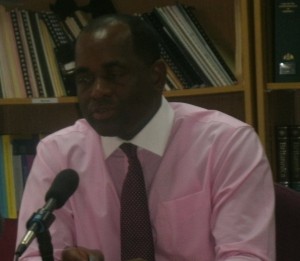 Talks between the Agence Francaise Development (AFD) and a Dominican delegation is said to have gone well and according to Prime Minister Roosevelt Skerrit, the Agency is now prepared to fund a 15 megawatt geothermal power plant here.

“First of all the AFD has said to us very clearly that they are prepared to finance the construction of the 15 megawatts (geothermal) plant in Dominica,” Skerrit said during a press conference on Tuesday. “Of course subject to a formal request by the government of Dominica for the financing.”

He continued, “Now as to how much will be through the way of grants and loan is a matter for discussions and negotiations with the AFD… but they have indicated that they are prepared to finance the construction of the 15 megawatts plant in Dominica for Domestic consumption.”

He also  said that they are willing to offer technical assistance Dominica as well.

The prime minister said discussions were also held on Electricite de France’s (EdF) decision to withdraw its participation in developing the geothermal sector on the island.

Skerrit noted that the French were “totally taken aback” by the EdF’s decision.

“And couple months ago EdF indicated that it is no longer interested in developing the plant in Dominica and that took every body by total surprise and everybody was shocked including the French Government,” he noted.

He said the citizens of Martinique and Guadeloupe “are looking forward to the geothermal energy” and “in fact they were taken by surprise by the decision of EdF.”

Government’s plans to develop the island’s geothermal energy sector have met stiff opposition from environmentalists and a severe blow was dealt recently by EdF’s announcement.