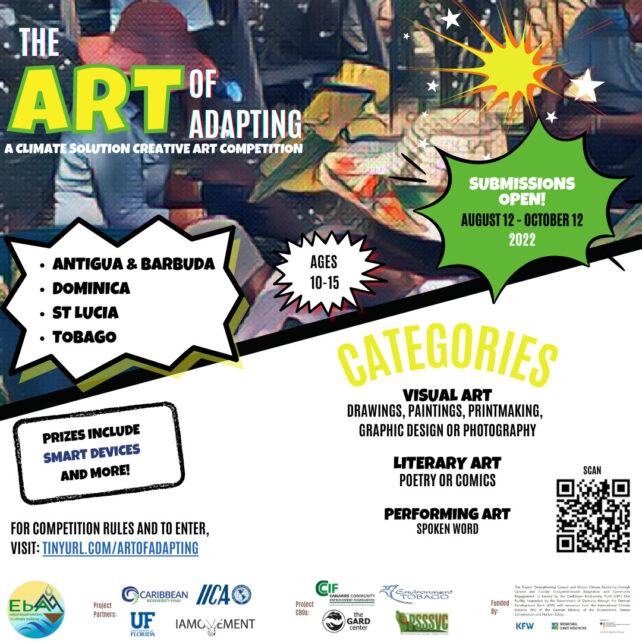 Young people, ages ten to fifteen, who reside in the project’s target communities, are invited to join the competition’s call to artistically depict solutions to our climate crisis. Specifically, entrants from St. John’s and Pares in Antigua and Barbuda, Petite Soufriere and San Sauveur in Dominica, Anse La Raye and Canaries in St Lucia, and Charlotteville in Tobago will be eligible to vie for prizes which include smart devices and more, that will be awarded to the top three visual, literary and performance arts entries in each of the four participating Caribbean communities.

The competition’s action word, “adapt”, is offered as meaning “to change, to change something, to suit different conditions or uses“, and “to change your ideas or behaviour to make them suitable for a new situation”. Participants may explore solutions to adapting to the climate crisis, through related themes such as raising awareness, building community skills, healthy land and marine environments, climate-smart agriculture, climate resilience, and green business.

“What are we leaving behind for our young generation? The time to act now was yesterday; the time for youth to take on the role of lead actor is quickly expiring,” beseeched Ms. Diana Francis, IICA-CBF EbA Project Lead and IICA Delegation Representative for Trinidad and Tobago. Speaking further about the impetus for the competition, Ms. Francis described, “Merging climate action with creative expression is one sure way, we hope, to get their attention, and to understand their perspectives, so that we may be more inclusive and give them the space to act, for the planet that they will inherit.”

Esteemed creative practitioners across the Caribbean and its diaspora, will select the winning entries from among the submissions: drawings, paintings, printmaking, graphic design, photographs, literary and performance art, poetry, comic strips, and spoken word. Entries will be accepted from August 12 through October 12, 2022, with winners being announced in November 2022.

The Ecosystem-based Adaptation (EbA) Project, “Strengthening Coastal and Marine Climate Resilience through Upland and Coastal Ecosystem-Based Adaptation and Community Engagement,” is funded by the Caribbean Biodiversity Fund (CBF) EbA Facility, and supported by the Government of Germany through the German Development Bank (KfW) with resources from the International Climate Initiative (IKI) of the German Ministry of the Environment, Nature Conservation and Nuclear Safety. The project is being implemented by the Inter-American Institute for Cooperation on Agriculture (IICA), along with partners IAMovement, and the University of Florida, as well as community-based organizations in the four participating countries: Gilbert Agricultural and Rural Development Center (A&B), Petite Soufriere San Sauveur Village Council (DOM), Canaries Community Improvement Foundation (SLU), and Environment Tobago (TOB).

IICA is the specialized agency for agriculture in the Inter-American system, with a mission to encourage, promote and support its 34 Member States in their efforts to achieve agricultural development and rural well-being through international technical cooperation of excellence.