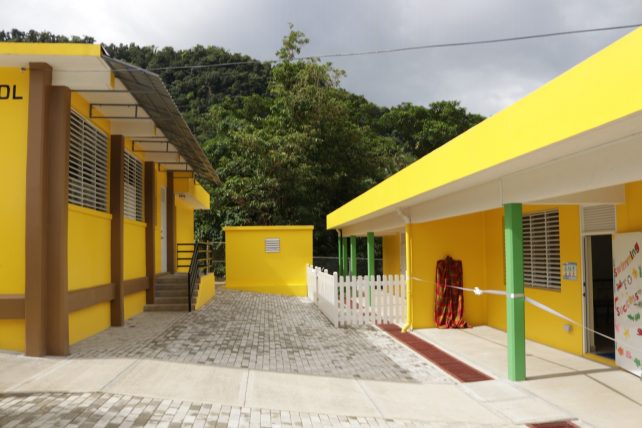 The keys to the final school renovated with funding from the Maria Holder Memorial Trust have officially been handed over to the people of Dominica.

Following the passage of Hurricane Maria in 2017,  the regional entity based in Barbados, was instrumental in renovating several primary schools in Dominica including the Belles, Concord, Trafalgar, Warner and Roseau Primary Schools.

During the handing over ceremony of the newly refurbished Wotten Waven Primary School on November 6, 2020, Consultant/Advisor to The Maria Holder Memorial Trust, Jane Armstrong, said that the schools are intended to be resilient and adaptable.

According to her, the project began in 2018 and within that period, the organization has refurbished and rebuilt six schools and provided brand new early childhood education places for Dominica.

“To have completed this in two years is a real achievement and there are lots of people to thank and recognize for this. We always are grateful for the partnerships we develop and I’m proud of this particular project and its partnerships,” Armstrong stated. “When we originally started the overall project, Wotten Waven was to be the first on the list but now as it happens, it’s the last school to be completed in the project.”

Minister for Education Hon. Octavia Alfred gave an address at the ceremony and highlighted the government’s success in repairing and upgrading schools post hurricane Maria. She said the new, renovated school adds to the cadre of resilient school buildings in Dominica.

“The ministry of education is proud of the work that has been done in conjunction with our various partners to return our students across the island to safer structures where they can thrive and expand their knowledge,” the Minister stated.

Alfred said that over the past three years, Government’s over overarching goal has been to build stronger and more resilient school structures as successive disasters in recent years forcefully demonstrated that  our school buildings need to be built to withstand several weather events.

Prime Minister Rooverlt Skerrit also spoke at the function and challenged the ministry of education to name one of the refurbished schools after the Maria Holder Memorial Trust for its generosity and commitment to the country’s education sector.

“They have extended a hand of friendship, a hand of development to our country and we have been seeing and benefiting from the fruits of this commitment and words can never express our gratitude to you,” he stated. “And the partnership that we have engineered between ourselves as a country  and a trust focusing heavily on education  and community development is a major contribution   to our country’s economic development and our country’s future.”

According to the Prime Minister, the enhancement of  these facilities will create a more conducive environment for learning and for teaching on the island.