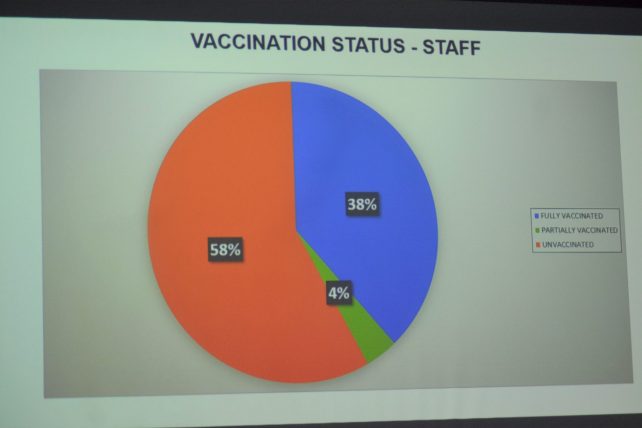 Chief Executive Officer (CEO) at the Dominica China Friendship Hospital (DCFH) Dr Dexta James, has revealed that a recent study has shown that only 38% of the hospital staff are vaccinated, occasioning the implementation of a campaign to increase this figure.

Speaking at a press conference on August 23, 2021, Dr James reported that between August 3rd and 5th, four members of staff of the DCFH tested positive for the coronavirus which prompted management to launch an antigen testing program under the theme ‘know your status.’

From the 490 and staffers tested, only 15 antigen tests returned positive.

This  data-gathering exercise also revealed that of the nearly 500 employees, 58% of the staff are unvaccinated, 4% partially vaccinated (received the first shot) and 38% were fully vaccinated.

The study further indicated that among staff involved in direct patient care, the highest level of vaccination was among doctors – 63%, while only 27% of the nurses employed at the DCFH had received the jab, placing them in the lowest category.

“We opined that the vaccination by staff at the hospital is low to moderate when we look at the overall vaccination status of our staff within Dominica and outside of Dominica,” the DCFH CEO stated.

Dr. James is partially attributing vaccine hesitancy among his staff to negative information and misinformation on social media as well as access to the vaccines, which he says the initiative hopes to address.

“We are taking steps to have senior doctors and nurses trained up to administer vaccines, and lead the program so that staff do not have to leave here to go anywhere else to get vaccinated,”  he disclosed. “So the program is an aggressive one. It is not only for staffers, but it is also for patients coming to the Accident and Emergency Department and as well as inpatients on our wards at any particular time.”

Though a deadline for this campaign was not given, the team hopes to have at least 65% of all of the staff fully vaccinated at the end of the exercise and plans on targeting the undecided employees in the first instance.

“We have a lot more work to do with those who are naysayers. There are a lot of myths out there about the vaccine and we have to now bring science and evidence to our healthcare workers, for them to make decisions,“ Dr James pointed out.

While many countries have prohibited unvaccinated health care workers from rendering their service, the CEO assured that the same will not be done at the DCFH, however, unvaccinated staff will be subjected to a bi-weekly antigen test.

Prime Minister Roosevelt Skerrit has said publicly on more than occasion, that he is not advocating for mandatory vaccination but has strongly appealed to Dominicans to get vaccinated in order to be able to effectively combat the virus. 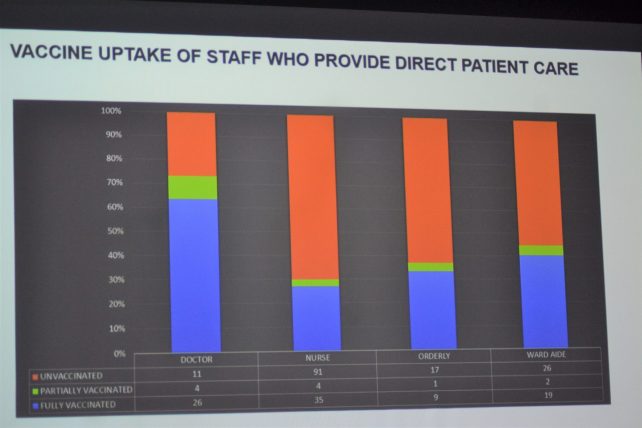