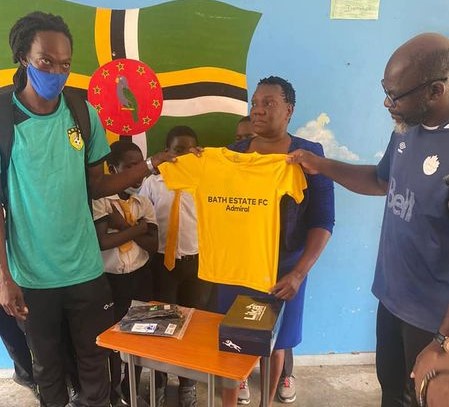 The club made a donation of brand-new football uniforms to the school which was handed over on May 20th, 2021.

Manager of the Bath Estate Football Club, Michael Joseph stated that the club’s relationship with the school will not stop there as the club has promised to also sponsor two students with school uniforms for the new school year this September.

“We already have a person contacted that will make the uniforms. The school will give us the two names and then we will get their fitting. We are doing this to alleviate that expense from a parent or someone who cannot afford to purchase a uniform. This will give them an ease of mind, ” Joseph said in an interview with Dominica News Online (DNO).

Joseph stated this is the first outside presentation the club has conducted in a while since its inception in the 1980’s adding that the students, principal and teachers were very appreciative of the new uniforms.

He encouraged other organizations to follow in their footsteps and said his club is willing to collaborate with them to sponsor other schools.

The Bath Estate Football Team has won the premiere league title four times and remains the only club in Dominica to have won the league for three consecutive years.