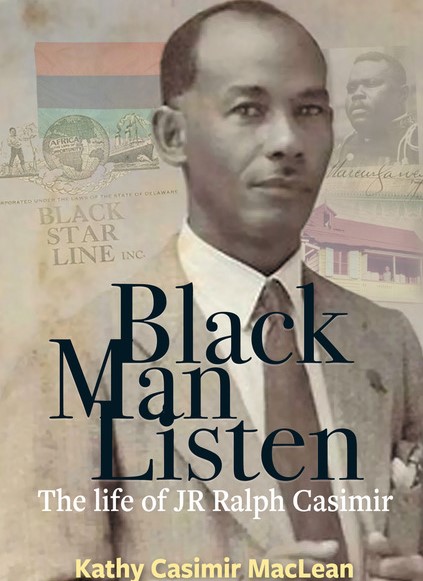 “I wanted to write Black Man Listen to honour my grandfather and to tell his story as until now it has been omitted from our island’s history,” says Kathy Casimir MacLean whose finely researched biography of her grandfather JRR Ralph Casimir (1898-1996) will be launched in Dominica tomorrow.

The biography of this pioneering Pan-Africanist, Garveyite, and poet from Dominica sheds light on little-known aspects of Dominica’s march to independence. Casimir played a leading role in
the Eastern Caribbean for Marcus Garvey’s Universal Negro Improvement Association (UNIA) and the Black Star Line. Calling himself a “New Negro”, he confronted not just colonial rule, but his island’s elites.

The biography reveals how a man from a humble background in St Joseph became a founding member and leading organiser in Dominica of the UNIA. He became a legal clerk, at times doing battle with his employer CEA Rawle, while his political activism from the 1920s-40s, led him to cross swords with Dominica’s newspaper editors and leading business people.

Throughout this time he wrote prolifically, especially for Garvey’s Negro World, while corresponding with leading figures in black radical movements throughout the world, such as Langston Hughes, leader of the Harlem Renaissance, in New York, and Sylvia Pankhurst, the radical suffragist and supporter of Haile Selassie in Ethiopia.

A published poet throughout his life, he compiled and edited the first anthology of Dominican writing in 1943. This was followed by three more volumes, the last being published in 1948. It was not until 1984 that he was recognised for his contribution to literature when he received the Golden Drum Award.

Publisher Polly Pattullo, from Papillote Press, the independent publisher based in Dominica and the UK says: “I’m very pleased to be publishing this important biography of JR Ralph Casimir, until now, a much-neglected figure in the story of Dominica’s march to independence.”

THE AUTHOR: Born in Dominica, Kathy Casimir MacLean lives in London where she has taught in primary schools, at Goldsmiths College, University of London, and London’s Institute of Education. She maintains close links with Dominica, is passionate about its history and culture and is chair of the Dominica Secondary Schools Supporters’ Association
(DASSSA).

What they say about BLACK MAN LISTEN

“It will surprise a new generation of Garveyites that in the early 20th century Dominica produced a vibrant core of activists led by Ralph Casimir, a deeply committed and passionate agent of the UNIA, who strove against great personal odds to fight for change and respect for black people.” LENNOX HONYCHURCH, Historian

“An intimate portrait of a man who dedicated himself to the liberation of his people.” GEOFFREY PHILP, Jamaican author of Garvey’s Ghost.

“A welcome opportunity to discover some much-neglected Pan-African history is provided by this biography perceptively written by his granddaughter. I feel so much better informed for having read this book!”
MARGARET BUSBY, writer and publisher, grand-daughter of Dominican-born Pan-Africanist George Christian

The book will be available to buy at Jays and the DHBA shop in the Old Market, Roseau.

The launch will take place at Alliance Francaise, Roseau, on Tuesday 8 November, at 6.00pm.

A northern launch of the book will take place at SeaCliff Eco-Cottages on Saturday 12 November, at 5.00pm.