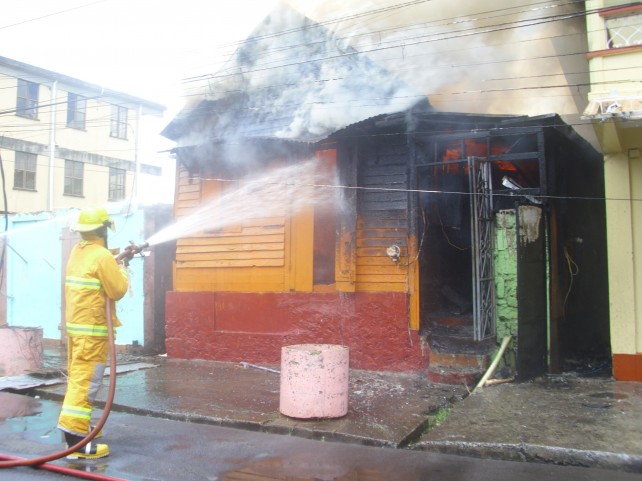 Offices and business places were abandoned around lunch time as hordes of workers, shoppers and the curious raced to Great George Street when news broke of a raging fire.

The fire reduced one business place to ashes while at the same time threatening to spread to a nearby dwelling house.

Onlookers watched in horror and shouted to fire officers as as the flames grew spewing thick black smoke  into the sky and threatening to blow the glass off the adjacent dwelling house.

The blaze which had started in a barber shop owned by a Haitian national, was eventually brought under control by the fire department.

Several other businesses in the area were affected.

The owner of the barber shop told DNO that he was in Gachette’s Jewelry Store when he heard of the fire.

“I wasn’t inside there …them man that was working in side there so when the fire start,” he said, “When them fireman come they start to send water, send water.”

He said he lost “quite a few things” including TVs, fridge, a laptop, and an iPad. “Even my passport lost,” he said.

The building was not insured and the owner said he believes it was an electrical fire.

“At the back it started …. is electricity man,” he stated. “While them man inside, they see smoke coming from at the back, when they tried to open the door, the smoke just ‘whoosh’ …they had to run out side they couldn’t save nothing, nothing”.

Another witness to the fire spoke about his experience.

Meanwhile the family members of the nearby house which was affected said they will be moving away for good since they lost everything.