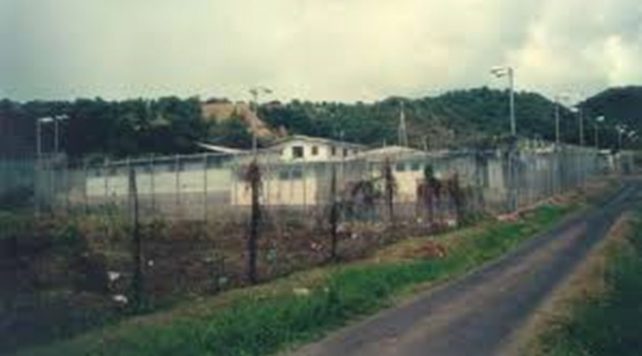 A buffer zone to combat the entry of illegal drugs into the Dominica State Prison daily should soon be in effect.

Acting Chief  Prison Officer, Jerry Edmund, said at a recent Ministry of Justice Press briefing that the buffer zone, which is being set up around the facility, is near completion.

“Almost on a daily basis, we have persons coming to our environment and throwing cannabis, cocaine, cellphones, over our fences for inmates. This is a  challenge and one we have to fight with,” Edmund stated.

The Acting Chief said the work is three quarters done, and is hoping that the last quarter can be completed to cordon off the prison from the surrounding communities.

He said lights and cameras are being procured for the external fence to enhance security the security of the prison surroundings.

According to Edmund, other plans to expand the prison include the construction of a multipurpose building that will house a virtual court, in addition to other measures.

“We are now expanding the piggery so that we can provide pigs to the abattoir and for our own use.  We would really like to be self-sufficient as it pertains to our meat so in the not too distant future, we will embark on the construction of a poultry farm. We are also in the process of extending our farms so that we can be self-sufficient in provision and vegetable and other stocks,” the prison official revealed.

Edmund said that since the advent of the global pandemic, all visits to the Dominica State Prison have ceased and this has placed an additional burden on the inmates and staff members.

“As a result of the COVID,  we had to introduce a quarantine unit. When inmates are received, they go into that unit and the necessary protocol is followed before they join the general population,” he added.

The acting Chief called on the relevant authorities to invest in the human resources of the sole prison on the island as that institution is in dire need of the additional assistance.