National Bank of Dominica Ltd (NBD) brightened the holidays of the students and teachers of the Soufriere Primary School and the residents of Chances with special Christmas activities.  As part of its Outreach Programme, the Bank contributed meaningfully to entities around Dominica during the Christmas Season.

On Wednesday December 13, staff of NBD brought immense joy to the hearts of over one hundred attendees at the Soufriere Primary School, where the Bank hosted its annual Children’s Christmas Party.  The teachers and students were ecstatic to be entertained by the Bank’s Mascot, Tiko the frog, as he danced and played with the children.  Of course, Santa was present to deliver gifts to both the students and the teachers. 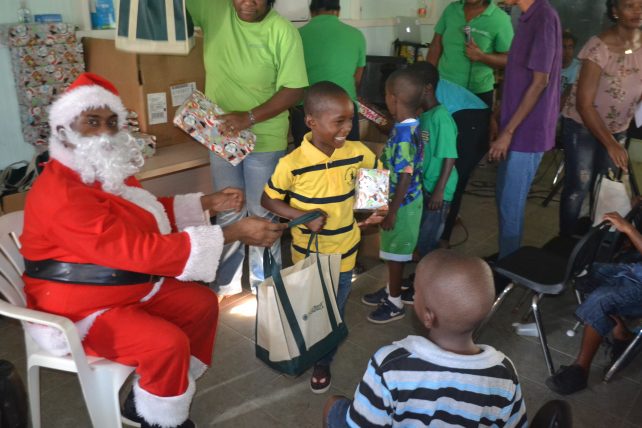 During the passage of Hurricane Maria, the structure of the Soufriere Primary School was heavily compromised. As a result, the school is in need of supplies to rebuild and to regain some form of normalcy.  NBD donated a much needed laptop to the school, which was received with utmost appreciation.  Mrs. Nadia Henderson, principal of the Soufriere Primary School was grateful for the gesture and thanked the Bank for selecting her school.

Mrs. Suzanne Piper, the Executive Manager of Marketing at NBD, expressed compassion to the school body at the losses they suffered both personally and as a school.  “We are happy that we could make a difference that allows for smoother operations of the school,” she said.

Meanwhile, a contingent from NBD visited the residents of Chances on Sunday December 17.  They spent the afternoon interacting with the children, and spreading Christmas Cheer.  The staff served a prepared meal and presented the children with gifts.  Mrs. Jenny Honore, a representative of Chances, said they were grateful that NBD thought of them this Christmas.

Managing Director of NBD, Ellingworth Edwards, said that Hurricane Maria did not deter the Bank from living up to its commitment to improve the lives in the communities that it serves.  He extended warm Christmas wishes to the Bank’s customers and Dominicans everywhere.