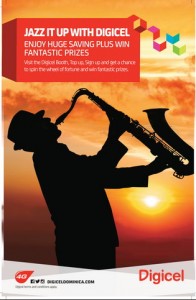 Digicel has announced that it is back on board with its sponsorship of the Jazz ‘N Creole Festival for its sixth consecutive year.

Set to take place on Sunday 24th May 2015 at the Cabrits National Park in Portsmouth, the Jazz ‘N Creole Festival highlights Dominica’s culture through a fusion of jazz and creole music, food and exhibitions. This year, renowned saxophonist, Arturo Tappin, will be the headline performer at the Festival, supported by other big name acts including local singing sensation and Digicel Brand Ambassador, Michele Henderson.

For the first time at the Festival, Digicel will host a VIP booth where festival-goers will be able to interact with the Digicel team and have a chance to win great prizes. Patrons will also be offered great deals on Digicel smartphones as well as the Digicel Play cable and broadband bundle package.

Digicel Dominica Marketing Manager, Nathalie Walsh said; “Digicel sees the Jazz ‘N Creole Festival as a major part of Dominica’s cultural development and is pleased to be on board for another year. We are thrilled to be hosting a VIP section for the first time and look forward to interacting with all of our business customers and fans of Jazz and Creole music.”