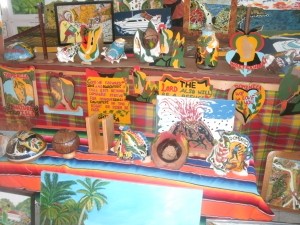 The items range from the useful to the strange, from the traditional to the modern and everything in between.

There were bush rums of all imaginable types, candle holders carved out of a single block of wood, Kalinago craft, locally made jewellery and perfumes, paintings, handmade dolls, locally made toilet paper, handmade candles and soaps and more.

Then there was the white brain coral with “Obama, first black president” and an American flag emblazoned on it.

“I did that with my own hands, right here in Dominica,” the artist behind the concept boasted proudly.

The Roseau Market was alive with activity as the first ever Buy Dominica initiative featuring only Dominican made products, kicked off on Thursday morning.

The aim of the event, according to organizers, is to “create a light at the end of the tunnel for the local suppliers.”

“We are trying to focus the attention on what is Dominica,” Richards explained. “We want to showcase what is naturally Dominica. For too long we have been crying about foriegn products and foreign input and are now saying we in Dominica have stuff too. So let us do something about trying to showcase to the Dominica people that we have products that are as good as, and in many cases better, than imported products.”

He said the response has been good although this is the first time the event is being held. He noted that 45 stalls have been set up to accommodate participants and every single one has been taken up. “I am very happy about this,” he remarked.

Richards also noted that the event is a learning process. “There is no precedence for what we doing right now. We are hoping to see what happens between today and tomorrow to get a feel for what Dominica is looking for and people are already asking us if we are going to do it next year,” he said.

Richards stressed that every single product at the event is locally made. “Everything in here is Dominican made,” he pointed out. “Maybe some of the material may come from overseas but everything is produced and made here in Dominica.”

He is encouraging all Dominicans to come out in large numbers to support the event. “Come out and buy Dominica,” he said.