The government of Dominica has signed a contract with La Robe Creole Ltd for the supervision of works at the Douglas-Charles Airport.

The Douglas-Charles Rehabilitation Project is valued at $30-million and Chief Technical Officer, in the Ministry of Public Works and Ports, Emile Lancelot, said the supervisor/consultant is expected to represent the government on site and ensure that the works are done satisfactorily in a timely manner.

“The primary role of the consultant is to supervise the contract which is ongoing with SOTRADOM, which is in the value of $30-million,” he explained. “The consultant is expected to represent the government on site in overseeing the works, to ensure that it is done in a timely manner and also to ensure that it is done to the standard—in terms of quality—that is expected. The airport being a very important piece of infrastructure to Dominica, we have to ensure that the works are done to the highest standard possible. The consultant will be engaged until the end of the project…”

The works include repairs to the three taxiways, drainage rehabilitation, repair to the runway, repair to the wall along the river, as well as the construction of an extension of the sea wall, and a new crossing structure (east towards Wesley).

There are also ongoing fencing works at the airport, which are reportedly, in an advanced stage.

The project is expected to last four months.

The airport facility was severely damaged on August 27, during the passage of Tropical Storm Erika, due to flooding by the Melville Hall River.
Following the passage of storm, the Government of Dominica signed an EC$31.27-million contract with SOTRADOM SAS for rehabilitation works.

On Wednesday, January 6th, fencing material arrived at the Woodbridge Bay Port aboard a Trinidad and Tobago coast guard vessel for works at the airport. 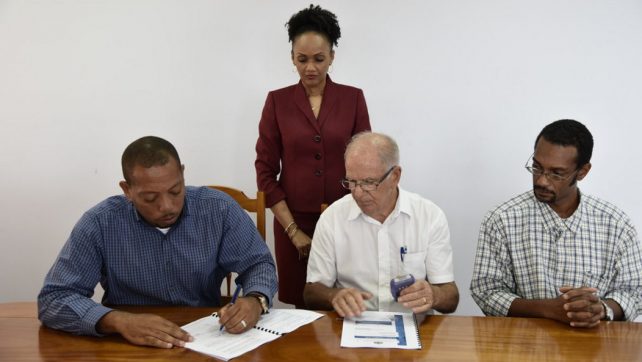