MV KLIPPER STREAM will sail from Albert Johnson Quay in Portsmouth on Tuesday 11 August 2015 for her 100th voyage for the UK’s premier Caribbean shipping line.

Geest Line has been operating in the Caribbean for over 6 decades.

Klipper Stream is one of four specialist refrigerated (reefer) vessels which has been under charter to the line since 2008. A very versatile vessel she is capable of carrying 324 x 20 foot containers for cargo (or 40 foot equivalent), and her 4 holds are used to carry Break Bulk Cargo.

Geest Line is the leading shipping line in terms of Break Bulk Cargo carriage from UK and Europe to the Caribbean and can carry almost anything on deck. Her 4 holds are temperature and atmosphere controlled, allowing her to ship millions of Bananas from the Caribbean to the UK and Europe on a weekly basis.

She takes eight days to make her Atlantic crossing and only 28 days for a round trip Portsmouth to Portsmouth.

Klipper Stream, in concert with her 3 sister vessels, maintains a weekly presence for Geest line within the Caribbean. 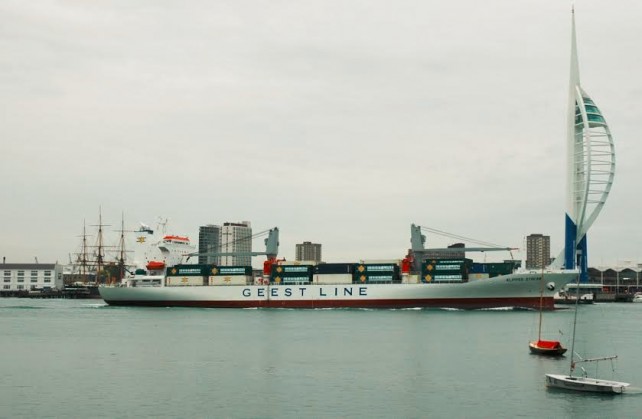