Director of Trade, Matthan Walter has appealed to vendors of Liquid Petroleum Gas (LPG) to adhere to prices announced for the product by the Division of Trade.

The price of LPG has gone down in Dominica because of the drop in oil prices on the international market but vendors across the island are not sticking to the prices and are actually charging customers more.

The matter has been described as “epidemic” and Walter pointed out that it is an offense to charge customers more than what is stipulated by the government.

“What I really want to add is really an appeal to the vendors of the Liquid Petroleum Gas to adhere to the announced prices by the Division of Trade…” he told Dominica News Online. “It is an offense not to do that and we have had an epidemic where those vendors continue to sell above the price and therefore not allowing the consumer to benefit from the fall in the price of petroleum products.”

He stated that laws are in place to control prices and “the Price Control Act is quite clear as to the actions that the Ministry of Trade as the implementing organ can take.”

However, he stated that the Ministry of Trade does not want to go down that route.

“We know that in Dominica where persons are moral conscious and so we have an obligation that if government has stated that is the price for the gas cylinder, then we should sell it at that price because the price already includes a profit margin and it also includes transportation cost for the price of fuel,” Walter explained.

Meantime Walter is warning that at any given time the price of fuel can fluctuate.

“We saw over the past few months an unprecedented drop in the price of fuel because of an oversupply on the market. And so what we have been trying to do is ensure that the consumer gets the more accurate price for fuel on the ground in accordance with the Supply Control Act by which we are guided,” he stated. “We in the Ministry of Trade simply wait on the posting for over the next 4 weeks and then we determine whether there is an up or down movement in the price of fuel.”

This is about the third time that the prices of petroleum products have dropped in Dominica since oil prices continue to plummet on the international market.

Below are the outlets and prices for LPG cooking gas across the island. 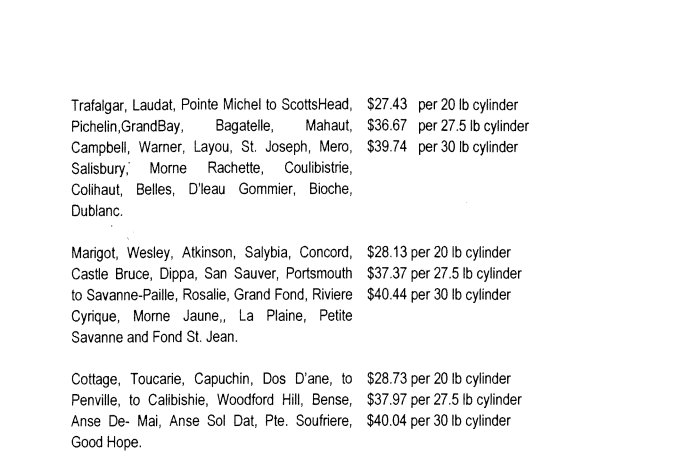