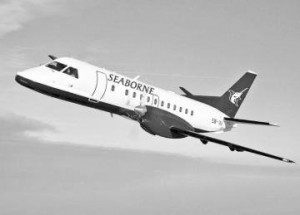 Prime Minister Roosevelt Skerrit has confirmed that Seaborne Airlines has made an application to operate flights in and out of Dominica and has welcomed the decision by the airline to do business with the island.

“We should look at welcoming Seaborne because people have been concerned about what other arrangements the Government would be making to replace American Eagle,” PM Skerrit said in an interview with the Government Information Service (GIS).

The prime minister said American Eagle brings in about 35 percent of visitors to the country and therefore the San Juan to Dominica route is important. “I think people must commend the efforts of the Government in seeking to address that particular challenge. We have been over the past few months, discussing and negotiating with Seaborne to get them to agree to do business with Dominica,” he noted.

Las week St. Croix-based Seaborne Airline said in a press release that effective April 1, 2013, it will be operating non-stop services from San Juan, Puerto Rico to Melville Airport in Dominica.

PM Skerrit said the airline has in fact applied to fly the route and all measures are being taken to ensure that a license is granted. “Seaborne Airlines has in fact made an application to operate flights in and out of Dominica. The application was sent to the Eastern Caribbean Civil Aviation Authority (ECCAA) to review and to give us advice on it. We believe that Seaborne will receive its license well before April 1. All administrative measures will be taken to ensure that this happens,” he said.

Seaborne Airlines is expected to replace American Eagle flights into Dominica following an announcement by American Eagle that it would be suspending flights from San Juan in 2013 to a number Caribbean destinations including Dominica.

Seaborne airlines also announced last week that effective Monday, February 18, 2013, that it has launched its first interline arrangement with American Airlines which will make connections from all of Seaborne cities at San Juan even easier.

“Critically for the arrangement with Seaborne is that they have been able to enter into a co-chair arrangement with American Airlines, so once you book with American Airlines you would automatically book with Seaborne if you are coming to Dominica. You won’t have the inconvenience of picking up your luggage in San Juan and recheck to get unto Seaborne. It would be a seamless travel experience from New York or Miami to get into Dominica,” he said.

The Prime Minister has commended the efforts of his Minister for Tourism, Ian Douglas, the Chief Executive officer of the Dominica Air and Seaport Authority Benoit Bardouille and the Director of the Discover Dominica Authority, Colin Piper, who were instrumental in negotiating and arriving at an agreement with Seaborne Airlines.

The airline company has been operating for more than 19 years in the Caribbean, carrying almost 2.5 million passengers.