Owner of Jungle Bay Resort and Spa, Sam Raphael, has stated his desire to rebuild the facility at a not yet determined location along Dominica’s east coast.

He made the announcement during a Philanthropy Day event held at the La Plaine Agricultural Training Centre on Wednesday.

Jungle Bay has been closed for business due to major damage from Tropical Storm Erika. It had been previously ranked as one of the top eco-resorts in the world prior to the disaster.

Raphael expressed a strong desire to rebuild, however, he indicated that it would be a difficult journey.

“I would have to locate the ideal piece of property that lends itself to the Jungle Bay brand and come up with the short term and long term financing which is not an easy feat,” he noted.

He stated that he was exploring options and is committed to rebuilding in Dominica if the opportunity presented itself but could not indicate where or when the redevelopment project would commence.

The Jungle Bay Philanthropy Day event was attended by around 200 persons, mostly from the Southeast and Petite Savanne.

The funds for Wednesday’s event came from donations that were made by over 600 past guests as their way of showing solidarity with Jungle Bay.

Parliamentary Representative for the La Plaine Constituency Petter Saint Jean represented Prime Minister, Roosevelt Skerrit, who was unable to attend due to the arrival of the Venezuelan President, Nicholas Maduro, on Wednesday afternoon.

Saint Jean praised Jungle Bay for the significant contribution it has made to Dominica and to the constituency.

“Sam, the Prime Minister specifically asked me to assure you that the Government of Dominica is going to do everything it can to support the rebuilding of Jungle Bay,” he said.

Saint Jean indicated that he will do everything he can to ensure that Jungle Bay is redeveloped in the La Plaine Constituency. 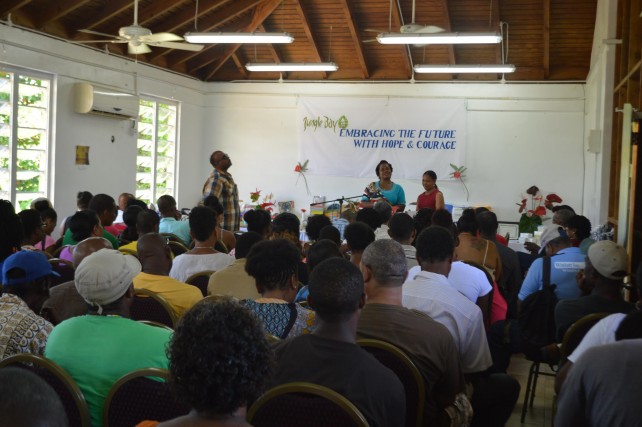