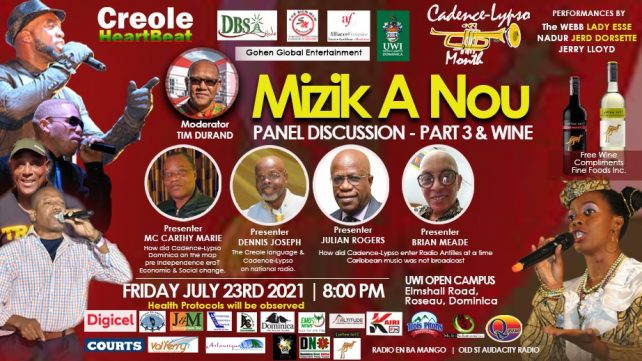 These discussions are held in celebrations of Dominica’s first ever Cadence Lypso month this July.

Owner of creole Heartbeat, Leroy ‘Wadix’ Charles stated in a press release that the challenge to sustain the nature isle as the creole capital of the world lies in the hands of Dominica’s patriots and media practitioners.

He suggested that a comprehensive approach should be made in marketing our lifestyle, cuisine, clothing and music as the seasonal approach continues to be diluted by global influences.

“Cadence Lypso is 100% Dominican and the rich history of this genre covers, has sold over 1.5 million copies and has sought licenses to be manufactured globally, only second to Reggae in the Caribbean. This can be researched on Discogs for verification.”

Charles thanked all media partners for their support in broadcasting this historic event as “education is paramount in a congested musical environment.”

A complimentary glass of wine awaits attendants on entrance and all Covid- 19 protocols will be observed.

The fourth and final panel discussion – ‘Cadence Fashion Cocktail and Party’ will be held next week Friday, July 30th at the Alliance Francaise from 8pm.