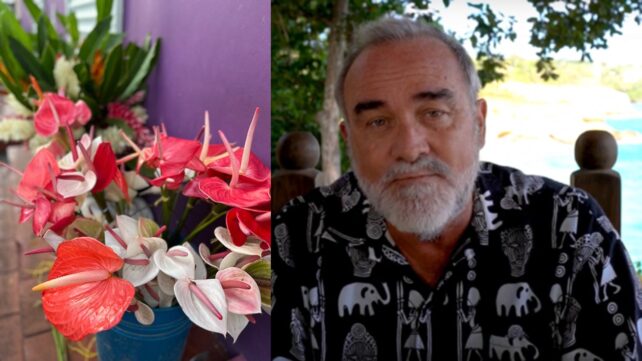 There is a popular Dominican saying about giving people their flowers while they are still alive. I’d like to present Dr. Lennox Honychurch, a Dominican hero, with an exquisite  virtual bouquet of Wotten Waven anthuriums.

The first time I read a book written by  Honychurch. I was about 12 and my godfather, Newton Ambo from Salisbury (where I was born and raised), had gifted me The Dominica Story for Christmas. It left a lasting impression on me. The book, written in 1974, four years before Dominica would receive its independence, was the first book I had read that told our story, the story of our beautiful Dominica in such detail and with such appreciation and love. In 1995, an updated version of the book was published detailing the years from the last publication.

A few years later, when I taught, among other subjects, Caribbean History to students at my own alma mater Isaiah Thomas Secondary School, formerly the St. Joseph Secondary School, I leveraged Dr. Honychurch’s book, The Caribbean  People for lesson plans and my appreciation of Dr. Honychurch grew exponentially. There are now three editions of the book as Dr. Honychurch continues to chronicle Caribbean life almost in real time as it becomes history. The Caribbean People is critical in the education of children across the Caribbean. My husband who is Trinidadian recalls that this title was the basis for his own Caribbean history education in high school. How fortunate we were and are in Dominica and the broader Caribbean to have an acclaimed historian inform and educate our children about their past, to teach about the events in history that have made us, well, us.

Lennox Honychurch was born in Portsmouth, Dominica in 1952, was educated through high school on the island and achieved a PhD in Anthropology and Museology at Oxford University in England.

Beyond being an amazing and prolific historian and writer Dr. Honychurch wore and continues to wear many other important hats. He was a politician early in Dominica’s history before its independence. He’s an artist and curator and was instrumental in the creation of the Dominica Museum in Roseau. He is a lecturer, broadcaster, a tour leader and his broader role as a historian has included detailing and preserving the history of the Caribbean’s indigenous people and researching and restoring historic buildings.

Beyond what he’s done for Dominica, which is monumental by any standards, he’s served as a critical resource to the rest of the Caribbean including founding and serving as a board member of the Museum Association of the Caribbean.

Lennox Honychurch is beyond just a household name in Dominica. He’s given our small island and the broader Caribbean an authentic voice; he’s allowed us to own our story, to have pride in our heritage, in who we are. In gifting us with so much untainted knowledge, he gave us much power. He’s lived his life in service to Dominica, with a seemingly almost relentless goal to tell our story, to preserve our history, to own our present, for us, by us. He has won awards and accolades to recognize his contributions to the world, but to me, he is a Caribbean hero.