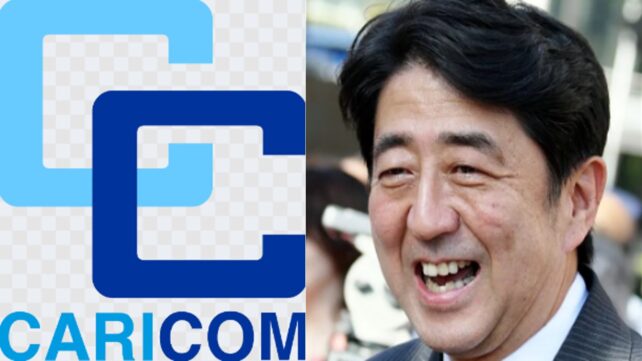 The Conference of Heads of Government and the entire Caribbean Community (CARICOM) are shocked and saddened by the assassination of the former Prime Minister of Japan, the Honourable Shinzo Abe.

Mr. Abe is well remembered in our Community as in 2014 he became the first Prime Minister of Japan to visit the Region and meet with our Heads of Government taking to a new level the political engagement between CARICOM and Japan.

It was during that visit the Prime Minister signalled Japan’s support in recognizing the vulnerability of Small Island and low-lying coastal Developing States (SIDS) and expressed Japan’s willingness to take into consideration issues other than GDP per capita as criteria for determining the provision of official development assistance.

It was Prime Minister Abe who, during the Summit in Port of Spain, reset CARICOM-Japan relations by outlining his country’s three-pillar Policy towards the Community. These were: co-operation towards sustainable development including overcoming vulnerabilities particular to small island states; deepening and expanding bonds founded on exchanges and friendship; and co-operation in addressing challenges in the international community.

CARICOM is highly appreciative of Mr. Abe’s significant contribution to enhancing relations between the Region and Japan.

CARICOM extends deepest condolences to the family of Mr. Abe, and the Government and People of Japan on the death of their longest-serving Prime Minister and a man who made great efforts to reshape his country and its place in the world.