Mr.Wang Quanhuo introduces China’s practical experience and decisive achievements on the fight against the COVID-19 that people are most concerned about at present. Wang said that COVID-19 is spreading all over the world and threatening people’s health and safety. Under the leadership of President Xi Jinping, China has adopted the most transparency, comprehensive, large scale and strict measures to control the virus spreading. Millions of people were united to fight against the epidemic. In less than 20 days, two specialized hospitals and 16 mobile cabin hospitals for treating infectious diseases were built in Wuhan, Hubei Province. More than 300 medical teams were organized nationwide and more than 40000 medical staff were sent to support Hubei Province. A decisive victory in the fight against the corvid-19 was quickly achieved. On March 13, only 11 new cases were diagnosed in China, while 1430 cases were cured and discharged at the same time. Until March 13, a total of 65541 cases was cured. In China, it can be said that the cold winter is about to pass, and the dawn is just around the corner. Mr. Wang said the Dominica government announced that it would donate 10000 masks to China, of which 4050 masks had arrived in Wuhan, China. The Government of Dominica has also repeatedly stated its firm support for China’s fight against the COVID-19, for which the Chinese government sincerely thanks. Wang said the Dominica government is making every effort at present to prevent the emergence of COVID-19 here. China is willing to share its experience with Dominica. The Chinese Medical Team can also play an active role, and the Chinese National Health Commission is willing to donate test kits for detecting the COVID-19.

Mr.Wang Quanhuo mentioned the construction of the Dominica-China Friendship Hospital Project is progressing smoothly. The project is divided into seven phases, in which the first phase of Emergency Building and No. 1 Medical Technology Building have been handed over and put into use, the second phase of Expert Dormitory Building is about to be completed, the third phase of Outpatient Building and No. 2 Medical Technology Building foundation have been completed, and the fourth phase of Administrative Office Building main structure is about to be completed. If Dominica can complete the removal of the old houses needed for the fifth and sixth phases of Ward Building at the same time in July or August this year, China promises to complete the whole project construction more than one year ahead of schedule. This needs the cooperation of the Ministry of Health, Wellness and New Health Investment of Dominica as well as the Hospital.

In the speech of Mrs.Letitia Lestrade-Wyke, the Permanent Secretary of the Ministry of Health, Wellness and New Health Investment of Dominica said that China’s help to Dominica is obvious to all. The use of the new hospital building has greatly improved the diagnosis and treatment environment for the patients. The arrival of the Chinese Medical Team has also eased the patients’ difficulty in seeking medical help and contributed to the speciality construction of the hospital. They welcomed and thanked this, and hoped the two countries would continue to strengthen medical cooperation and improve the levels of multiple aspects of the hospital in the future. Though China is experiencing the outbreak of COVID-19, it continues to provide consecutive medical assistance to Dominica. All the work is still proceeding orderly. They thanked the Chinese people for their efforts to help Dominica. 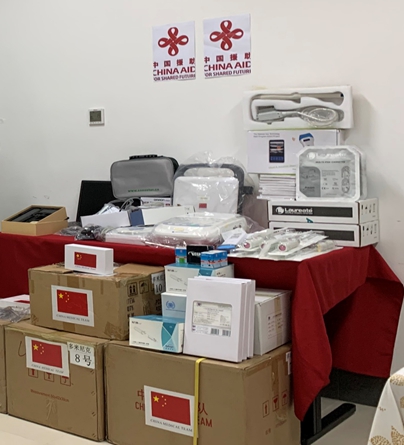