“I am running to restore the broken systems which no longer deliver on the promise of a brighter future,” UWP candidate, Clement Marcellin told supporters in Penville on Saturday night.

Marcellin was on Saturday 11th May 2019, officially declared the UWP candidate to contest the upcoming general election in the Vieille Case constituency.

“We need representatives who have the absolute confidence in people. We need a government representative who will assist in developing industries, businesses, companies, and not simply sell passports as the only revenue generating scheme,” Marcellin told the gathering. “This election is about the future and last hope of rescuing Dominica from the claws of failed leadership. We have two options, either we cast a blind eye and fall into peril and despair or we rise up. We rise up and vote for a better future for our children.”

He sought to dispel the notion that politicians are all from “the same breed.”

Marcellin went on to say that he believes in inclusiveness and when elected, he will develop programs for “all and with all.”

“I will develop community institutions and mechanisms to leverage fair and unbiased services for every community member. …..revitalizing the economy of the north with more investment in agriculture and agro-business, tourism, renewable energy technology and indigenous herbal medicine etc.” the Penville native promised.

“Maman mwen toujou di mwen, lesspwit pas ka weste adans yon sel tet.” (My mother always tells me, wisdom does not reside in one head),” he related. “Plis ou wantwe adan bwa, pli ou jwenn bel bwa” (the further you go into the forest, the more beautiful the trees you meet), meaning that no matter how good something looks, there is always something better.

According to Marcellin,  good, better, best and excellence will always be perpetual enemies, “so no matter how good something looks, you need to change and keep looking for something better.”

Marcellin reminded voters of the significance of a political campaign.

“ When the polls close on election night and the fanfare has all mellowed down, it comes down to you – your lives, your children’s future, your community and your country. A political campaign is a movement which should inspire confidence, outline plans and programs for community and create a momentum for change, not just a sewo or a bachanal and certainly not to instill fear,” he stated.

Addressing some people from Penville who were standing on the hillside in the dark listening and cheering, Marcellin asked, “Why are my people of Penville standing on the hill when there is light and ample space for you to come and listen?” He urged them to not be afraid and to take a stand for what they believe is right.

UWP leader Party Leader, Lennox Linton in his address, compared the entry of Marcellin and his opponent Prime Minister Skerrit into the political arena as “chalk and cheese.” He contends that Marcellin is far more knowledgeable than Skerrit was when he started out and said it will be the biggest upset in political history in Dominica when Marcellin defeats Skerrit in the upcoming general election. 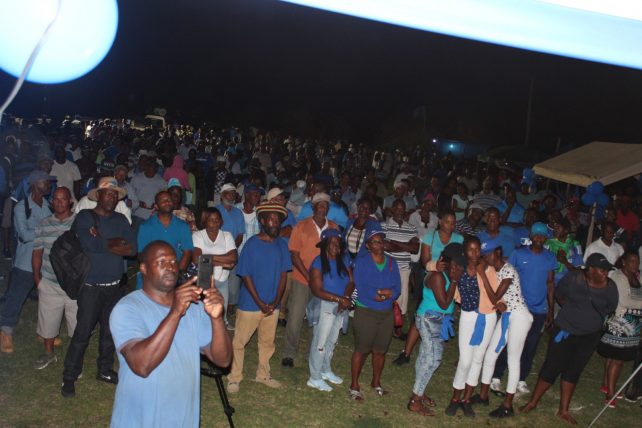