In my previous commentary on a new International airport for Dominica, I provided you with some food for thought regarding cost and revenue. How you digest it and look at it is totally your prerogative. I’m impartial, un-affiliated and have no personal gains or benefits from what will be done in Dominica.

It was probably expected from me to suggest air transportation alternatives.

I start where I ended in my previous column. If you want your international airport, so be it, yet, it will take at least three years for completion and until the first hoped for international jet may be arriving. So, what are you going to do in the meantime to grow your economy and secure your existence? You cannot sit and wait three years. What you need is airlift. There is no use in starting the usual blame games about the why or why not of the current airlift situation. Solutions are needed and needed rapidly.

Did you know that it is feasible to start an Air Dominica airline model with 8 daily flights to Antigua, Barbados, Guadeloupe and Martinique; 4 in the morning and 4 in the afternoon (one of those four destinations could be exchanged for St. Lucia). How long would it take to set up the operation? Six months; could be less. Startup costs? About 500,000 US$. The airline model should be profit making. Bluff? Hot air? Phantasy?

A feasibility study was done two years ago by an independent airline expert who developed the airline model. The study is at a location in Dominica. I will not reveal who owns the study or where it is. I know the content but will not disclose any details. The well-done study considers all the various cash flow and load factor situations. Maybe just two numbers of the study to think about: 13,000+ new passenger arrivals which could mean about US$ 12 million new spending in Dominica. Unfortunately, I cannot go into further details as I don’t own the rights to the study or the model. And btw, I have no intention of being part of any airline or airport operation.

Some may now be stuck with a dilemma. Waiting 3 years and spending 300 million US$ or getting started with five hundred thousand within 6 months and achieving 12 mio in new spending by tourists. Depending on demand and success of the airline, its schedule could be extended. 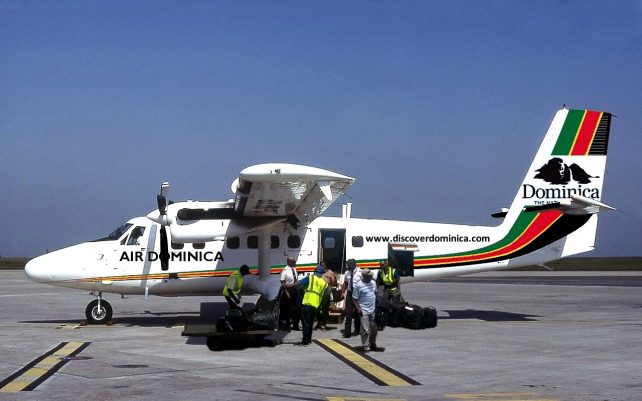 The rendering shows that smaller airplanes are used that can land at Canefield Airport, That means that visitors, business people, government officials in Roseau have a short way to their flight connections. Canefield would become a busy airport that might be operated with an annual profit instead of the current annual loss. It may need more employees. The airport food stand can be open and taxis should be awaiting the arriving passengers.

Of course, comments against using a small airport and using small aircraft will now be posted. Go ahead. Just keep the following in mind.

St.Barth is probably the most flourishing and wealthiest of all islands in the region. They are doing so well that they don’t want mass tourism and cruise ships. And they don’t want more tourist than they currently have. Most passengers arrive via the hub St.Maarten.  It does have its own airport, but the runway is considered one of the 10 most challenging runways in the world. Only small airplanes (18 seats). How does it compare with Canefield’s runway? It is 300mtr/1000ft shorter. Yet…, St.Barth’s airport handles 90,000 passengers annually. Compare that with Canefield (est. 2,000 pax) or Douglas-Charles (est. 103,000 pax).  St.Barth’s annual average number of daily flights is about 97 movements (-arrival and departure). During the high season on a peak day the number is 200 movements and the peak hour 38 movements.

So, don’t laugh or underestimate what is small. The St.Barth example should be a message to the “can’t be done/can be done” people; even with a small airport, it can be done.

As for the often-hailed Argyle airport. Reports indicate that the 2017 stayover visitors arriving by air on the mainland of St. Vincent and the Grenadines (SVG) was 3.5 percent lower than the year before. An unconfirmed report indicates that a meagre one percent of expected 2018 stayover visitors will be foreign tourists who would not have visited the mainland if Argyle airport had not been built. This works out to a pitiful 1,000 people. It took nine years to build Argyle airport at an estimated cost of 370 million US$. So, if St.Vincent can have it, why can’t Dominica have it?  Just more food for thought!

Fourth Part: Last comments on airlift and airport in Dominica

Cdr. Bud Slabbaert is the chairman and initiator of the annual Caribbean Aviation Meetup conferences. The international results and solution oriented event brings airlift stakeholders from both aviation and tourism industry, as well as government authorities together. Mr. Slabbaert’s  background is accentuated by aviation business development, strategic communication, and journalism.

Opinions expressed in this commentary are not necessarily those of Dominica News Online or its advertisers.