The Trump administration’s relentless economic and political pressure on Venezuela government over the past two years is rattling Nicolás Maduro’s regime. Despite his braggadocio – putting on a brave face – Maduro is feeling the pressure. He is extremely worried that Trump will take or engineer some form of military action to remove him from power. Trump’s bellicose rhetoric and the constant pressure being put on governments in the hemisphere by U.S. government officials increase Maduro’s isolation. In light of U.S. Defense Secretary James Mattis’ resignation, the prospects of military action against Venezuela are now more likely than ever. Considered to be the only remaining constraint on Trump’s reckless use of military force, Mattis leaves a void and his role in the Trump administration is not expected to be replicated by his eventual replacement.

Most governments in the region, already unhappy with the deterioration of democracy and freedoms in Venezuela, the abrogation of human rights protection, and the abuse of the legislative and justice systems are not willing or able to oppose the political pressure or the coercive sanctions measures imposed by the Trump administration on Maduro’s government. Some of these governments were close friends of Venezuela and have benefited over the years from Venezuela’s oil riches. Some were very dependent on Venezuela’s largesse. Now, under U.S. pressure they abandon Venezuela, and their focus has turned to eking out exemptions from the effects of U.S. economic sanctions against Venezuelan targets. Exemptions come with a price. Those granted exemptions are required to support Trump administration’s Venezuela policy.

In addition to the external economic implications of Venezuela’s problems, 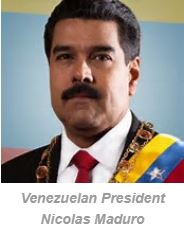 additional impact is felt more broadly in the region.  Venezuela’s problems are not contained within the country’s borders. Neighboring countries are particularly impacted by a stream of refugees which are creating humanitarian burdens for these governments. Anti-Venezuelan immigrant sentiments are bubbling up to a boiling point in neighboring countries, and support for Maduro’s regime has all but disappeared. If the current trend continues unabated, the problems will get worse for Maduro.

One geopolitical reality that is proven time and again is that certain state and non-state actors take advantage of conflicts and destabilized environments to establish a foothold.  We see this often in the case of terrorist groups and rogue states taking advantage of weak governments. We’ve seen terrorist groups play this role in Afghanistan, Yemen, Iraq, and Syria, in a number of countries in northern Africa, such as Libya and Tunisia, and a number of sub-Sharan African countries. We see this being played out by Vladimir Putin’s Russia and by Iran, especially where the U.S. is pursuing a policy against the government of the target country. We’ve seen this in Syria, and we saw this in Russia’s assistance to North Korea to evade U.S. sanctions.
Not since Russia’s engagement with Cuba in 1959 and subsequent years, have we seen this level of Russian military engagement in the hemisphere. Over the past decade plus, Russia’s economic engagement has been growing in the Western Hemisphere. We have seen Russian investments in the bauxite/alumina industry led by one of the world’s largest players in the industry – Rusal U.C., a Russian conglomerate with close ties to Putin.  We now see the Russian government investing in Venezuela’s oil industry to the tune of some five billion U.S. dollars and another billion dollars in Venezuela’s gold mining industry. Russia has extended a lifeline to the dying Venezuela oil industry and by extension, Venezuela’s economy and the Maduro regime.
Russia’s direct investments in Venezuela flout U.S. sanctions as Russia has, in aiding North Korea to evade U.S. sanctions. Russia does not need Venezuela’s oil.  As a matter of fact, increase in the production of Venezuelan oil has the potential of reducing the price of oil on the global market. Depressed oil price hurts Russia’s economy which is already hurting from U.S. sanctions against Russia’s oil industry and the current low global oil prices triggered in part by increased U.S. oil production.
Almost simultaneously with announcement of Russia’s $6 billion investments in Venezuela, it was announced two weeks later in Moscow, that Russia was stepping up its military engagement with Venezuela and in the hemisphere. Since then, on December 17, 2018, two long-distance Russian Tu-160 strategic nuclear bombers landed in Venezuela, as part of a military exercise. Also included, are a Russian military transport plane and an Il-62 passenger jet with 10,000 miles flight capability. This intrusion of Russian military aircraft in the hemisphere is not intended as a one-off exercise.  The Kremlin also announced that Russia was entering into an agreement with Venezuela for Russia to establish a permanent military base on La Orchila, a Caribbean island owned by Venezuela.
There are many questions raised by Russia’s stepped up engagement in the region. Here are some examples. Given the effect of increased oil production on global oil prices, how does Russia benefit from more oil on the global market? Why would Russia be interested in further depressing global oil prices? Is it that Russia is hoping to control Venezuela oil thus giving Putin control over a much greater portion of global oil resources and production? Will lower prices negatively affect U.S. expensive shale oil production further? Will Guyana’s new oil discovery be negatively impacted? Will Russia’s military presence in Venezuela embolden Maduro in his claims against Guyana’s territory? I will treat these questions as rhetorical for now, as it is impossible to provide comprehensive answers in just one article.
It is too soon to settle on Putin’s true intention. However, I do not believe he wants to trigger a military confrontation with Trump at this time in the hemisphere. The situation in Venezuela bears no similarity to the situation in Syria which is on Russia’s border – in Russia’s neighborhood. That being the case, Russia’s military presence in Venezuela, while providing a shield for Maduro against the United States, could also constrain Maduro from any reckless military adventure against Guyana.  In the meantime, Russia’s expanded role in Nicaragua should be watched carefully by the governments in the region. Nicaragua will be the subject for a separate discussion.
© 2018 Curtis A. Ward/The Ward Post