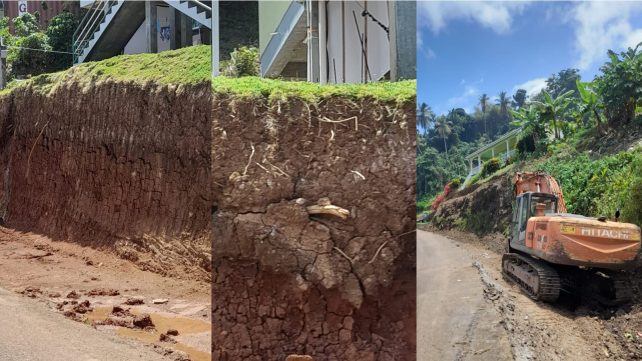 President of the Tipper Truckers Association of Dominica (TTAD) and former Chairman of the Atkinson Village Council, Anton Laville, is expressing safety concerns over how the road banks are being cut in the area.

The Government of Dominica, through the Disaster Vulnerability Reduction Project (DVRP) and funded by the World Bank, is rehabilitating 43.3 km of road from Bois Diab to Hatton Garden.

Concerning Lot 4 (Castle Bruce to Hatton Garden) which passes through the Kalinago Territory, Laville, a resident of Atkinson who is employed on the project, says that fear is mounting among villagers, that the manner in which the project is being done may result in several casualties in the event of another natural disaster.

“The banks are being done very straight which is very dangerous and it is clear to see that the way it is being done, it is going to cause us in the future to have land erosion,” he said. “Right now, with the work that’s being done, houses are hanging and it’s very unsafe and we fear for what may happen. We remember what happened to Petite Savanne, an entire village had to be relocated, and we don’t want this to happen in our area.”

The head of the TTAD stressed that he and the many other residents of Atkinson and the Kalinago Territory who are raising such concerns are not against the development of the road works being undertaken by Sotradom, a company headed by Jack Gardhankan, but instead, are only ensuring that safety measures are enforced.

He noted that they are not casting blame on the company, but on the engineers who are supervising this project.

“We are happy that this is being done. Myself, as a trucker, we’ve been fighting to get on this project, and finally, we’re getting work. However, it’s not because I’m employed on the project, it means that I shouldn’t bring light to the unsafe practice which I’m observing,” Laville said.

“In the ’70s when it was done, it was done in a  step format and it prevented erosions; it prevented landslides. Right now in  2022, if something is going to be done, it should be done in a manner that will actually protect lives and property but it is not being done in that manner and we are standing up against it,” the Atkinson resident declared.

He reiterated that the truckers are in favour of the work continuing but insists that it should be done in a manner that takes into account their observations.

Laville revealed that he met on Saturday with the present chairman of the Atkinson Village Council and requested that work on the project be temporarily halted until they meet with representatives of the World Bank sometime this week.

DNO has reached out to Cozier Frederick, the parliamentary representative for the area, who is also the Minister for The Environment, Rural Modernisation and Kalinago Upliftment  but we have not received any response from either minister.

Attempts to seek comment from contractor, Jack Gardhankan, have also been unsuccessful.

The project is being done at a cost of one hundred and twenty-six million EC dollars and will include slope stabilization, new roads, bridges and improved drainage.