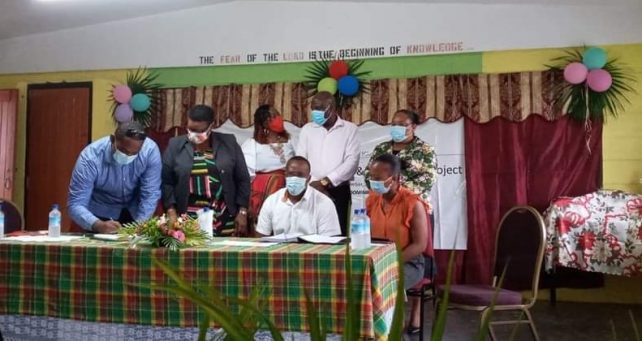 Two contracts valued at over  EC2 million dollars have been signed for rehabilitation works at two primary schools in the southeast of the island.

The funds are being provided by the Government of Canada, through the Caribbean Development Bank (CDB),

According to Minister of Education and Human Resource Development, Mrs. Octavia Alfred, the first contract for EC one million, eighty thousand, five hundred and seventy-two dollars and fifty three cents, will see the reconstruction and update of the Delices Primary School.

“This will include five classrooms, an early childhood unit, Principal office with kitchenette, washroom, sick bay and store room; a staff room with two washrooms, a fully equipped kitchen  and auditorium,  a cafetaria, computer lab, library and washrooms with  showers,” she said.

The second contract in the sum of EC one million, fifty eight thousand, eight hundred and eighty dollars and forty cents, will facilitate works at the Morne Jaune Primary School. Upon completion, the learning facility will boast of a new building block to house the early childhood students, a new principal office and staff room as well as  a flat concrete roof which could be used in the future for extension of the building.

The minister said that the buildings will be constructed to serve as hurricane shelters and will be built using resilience methods and codes.