An earlier version of this article claimed that Tourism Minister, Robert Tonge, said that over $60-million was spent to get Roseau, tourists’ sites and other areas ready for the Cruise Ship Season which began on Tuesday.

The figure of 60 million dollars as reported by DNO, was incorrect. The figure is actually 6 million. We regret that error and offer our apologies to the minister.

Tonge made that announcement while addressing the official opening ceremony for the 2018/2019 season held on the Dame Eugenia Boulevard.

According to him, although the country was severely damaged by the passage of Hurricane Maria, much work has been done to bring Dominica as close as possible to normal.

“As you know we suffered severe damages as a result of Hurricane Maria but as you can see today much work has been done to bring back Dominica to as close as possible to normal, but as you can well imagine we have much more work to do and the Ministry of Tourism, Discover Dominica Authority is fully committed to making this happen,” he stated.

He revealed that over 95 percent of the sites are back to normal, except for two that are ‘unofficially opened.’ He stated that people still visit the two sites because they are actually safe.

According to Tonge, a significant amount of monies have been spent to bring Dominica to this stage.

He encouraged members of the public to welcome the visitors and ensure that the country kept clean and green.

“Continue to provide the best possible service,” he stated.

“This is a major thing after Hurricane Maria, because last year we had to miss some of our calls because of the fact that last year we had a major hurricane that hit Dominica,” he remarked.

He welcomed the MV Celebrity Summit to Dominica and told passengers to enjoy their stay.

“We look forward to increasing the number of calls to Dominica and the passenger count on our lovely island,” Bardouille said.

Dominica is expecting well over 300,000 visitors in this cruise ship season and about 189 calls. 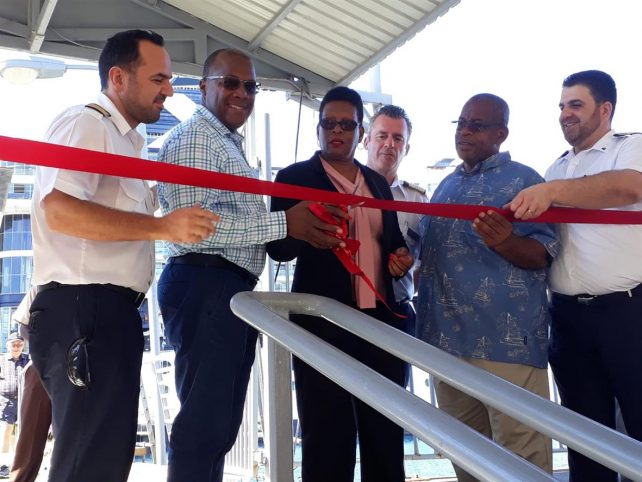