Chief Executive Officer (CEO) of the Climate Resilience Executing Agency of Dominica (CREAD), Pepukaye Bardouille, is of the view that CREAD, by itself, cannot make resilience happen.

She made that remark while addressing the annual Dominica Association of Industry and Commerce (DAIC) Eggs & Issues Breakfast held at the Prevo Cinemall on Wednesday.

The main focus of the event was CREAD’s work plan and its perspective on the importance of the private sector.

CREAD is expected to play an important role in Dominica’s fight against climate change and its mission will be to coordinate all reconstruction work to avoid duplication, maximize economies of scale, spot and fill critical gaps and ensure all reconstruction activities are focused on a single climate resilient recovery plan for Dominica.

“The reality is that CREAD cannot make resilience happen,” Bardouille said. “Resilience happens when people decide that they want to take charge and do what they can to protect themselves.”

Bardouille, who was the keynote speaker, believes that it is important for people to educate themselves, empower themselves and to give themselves a decent quality of life.

“To be the first climate resilient country in the world, start by communicating on what the effects are of climate change,” she noted.

She stated further that one of the approaches CREAD is taking is to implement flagships. 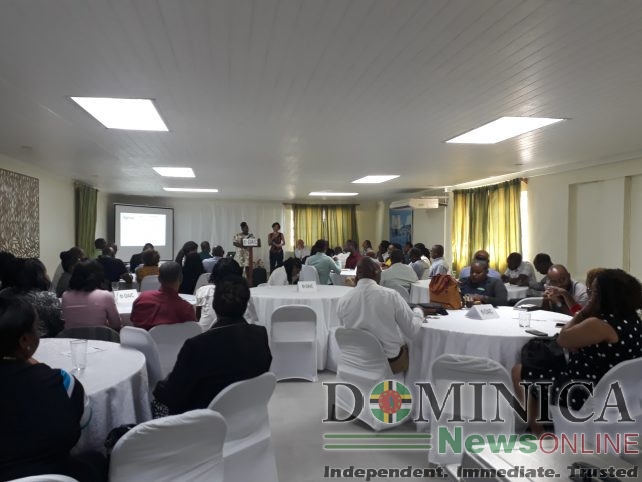 Bardouille explained that a flagship is an idea that is a little out of the box which involves multiple stakeholders, that probably requires public and private participation certainly in terms of financing, and which “has a national owner in Dominica, be it in the ministry, or a private sector player, or a foundation.”

“There are flagships around us that shows that we can bring together different stakeholders across different sectors…,” she pointed out.

Bardouille went on to say that an adaptive infrastructure is needed, “and here we are suggesting that roads, bridges, ports, water sanitation all of that need to be as resilient as possible.”

She mentioned that there are ways to make infrastructure adaptive.

“We can look at water, not necessarily having water pipes in the same way but having water stored. So, that doesn’t mean that it is resilient in any possible catastrophe but it is adaptive,” she explained.

The CREAD CEO said no country has a perfectly functioning system of government.

“Public institutions in Dominica need to be strengthened from a basic perspective,” Bardouille stated.

Bardouille underscored the importance of data and a decision-making protocol to deal with that data to achieving the goal of climate resilience for a country.

Policies and legislation, she said, need to be up-to-date and appropriate, “appropriate to Dominica and not St Lucia, and they also need to be implementable.”

She cited the need for solid plans for the country in such areas as processing, procurement, monitoring and evaluation, “basic things like project management and enforcement.”

The DAIC’s Eggs & Issues Breakfast is a platform for improving the knowledge of Dominica’s private sector and partners on relevant topics for an improved business environment.