Attorney Glensworth Emanuel has written a petition to Prime Minister Roosevelt Skerrit and President Eliud Williams calling for a public inquiry into what he said is a failed police investigation into a firebombing incident at his home in 2010 and the existence of a conspiracy to pervert the course of justice.

Citing the Commission of Inquiry Act Chapter 19.01 of Dominica Emanuel described the police investigation into the matter thus far as a “grotesque, unbelievable, bizarre and unprecedented failure” which has not brought those responsible to book.

The petition, dated October 15, 2012, pointed to the ‘advanced age of the virtual complainants’ and asked that the matter be inquired into without ‘fear or favor.’

The petition reads in part, “Whereas on the 25th day of December 2010, the home of Mr. Glensworth and Mrs Greta Emanuel of St. Aroment was the subject of arson and ostensibly attempted murder; and whereas the arsonist has confessed; and whereas the arsonist in his confession inter alia names his contractor/handler; and whereas the named handler remains a fugitive from Dominica; and whereas due to the effluxion of time and the failure of the Dominica Police Force to act reasonably and diligently there is fear of the existence of a conspiracy to pervert the course of justice.”

The petition, which was signed by 12 other persons, called on the inquiry to be convened and report on the “failure of the police investigation to date.”

This is not the first time Emanuel is writing to the authorities concerning the incident and calling for an inquiry into it.

In 2011 he wrote to then president, Nicholas Liverpool, expressing his concerns. “Regarding this investigation, I am constrained to the view that there is a conspiracy to pervert the course of justice within the Police Force,  the Commissioner of police and the Executive Branch of the Commonwealth of Dominica,” he wrote. “In these grave circumstances for all concerned I hereby call upon you, Your Excellency to use your good offices to prevail upon the Government to establish a Commission of Inquiry into these matters with the utmost urgency.”

See copy of petition below. 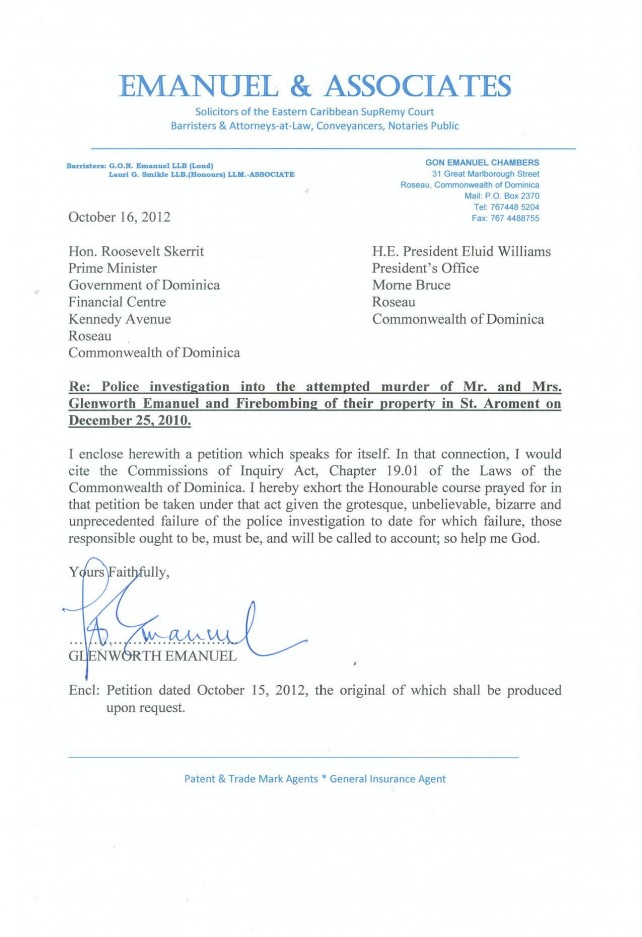 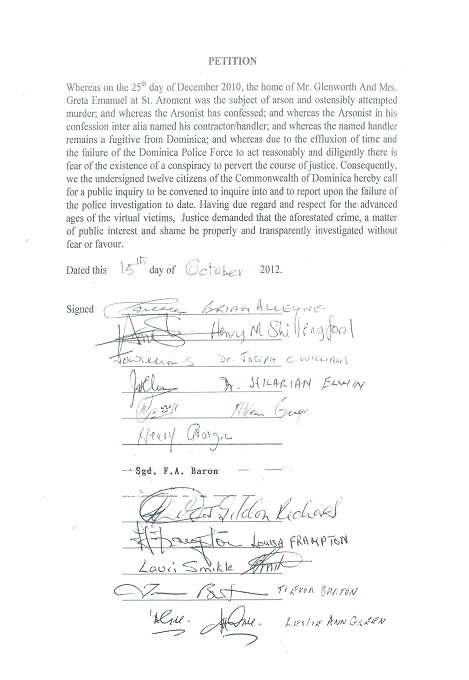