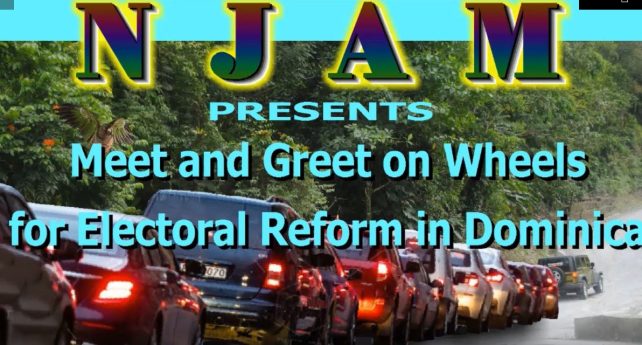 The National Joint Action Movement (NJAM) will continue its electoral reform efforts with a Meet and Greet on Wheels for Electoral Reform on Sunday 27th February 2022.

According to an NJAM press release, this is in keeping with one of the organization’s objectives to educate and mobilize the Dominican population on the need for electoral reform before the next general elections and is a follow-up to the Virtual Electoral Rally held on February 7th when the NJAM Roadmap to electoral reform was launched,

The event will commence at 10:00 a.m. at Pointe Michel and will end at Castle Bruce.

The release adds that during the event, NJAM will share electronic copies of the existing Commonwealth of Dominica electoral legislation together with legislation from other Caribbean countries including Barbados and Jamaica, to urge the Dominican population to familiarize themselves with the electoral process in our sister Caribbean countries and to develop expectations of what should be obtained in any revised legislation for the Commonwealth of Dominica.

NJAM says it will also release to the public, a list of recommendations that must be included in any revised electoral legislation for the Commonwealth of Dominica.

The release goes on to state that these recommendations will be presented to Sir Dennis Byron (who has been employed by the Dominica government to advance the process of electoral reform) at a scheduled meeting to discuss the matter within the next few days.

NJAM further encourages the Dominican population to ignore all rumors of an imminent general election within the next few months since, according to the organization, this is considered a ploy to test the tolerance and patience of the Dominican people.

In its release, NJAM reassures the Dominican population that the onward march to electoral reform in the Commonwealth of Dominica “is alive and well” and invites all Dominicans to be part of the Meet and Greet on Wheels for Electoral Reform on Sunday 27th February 2022.

NJAM encourages all participants to adhere to all Covid-19 protocols and to observe social distancing and insists, “there will be no public gatherings and everyone will be expected to remain in their motor vehicle.”

“This is Dominica’s quest for Free and Fair elections, the Democratic Right of ALL Citizens,” the release concludes.