Local attorney, Tiyani Behanizin, has told residents of Salisbury affected by what he said were expired tear gas and other armaments at a massive protest recently that they can take legal action against the government.

Furthermore, he said, steps are being initiated to contact Amnesty International and the United Nations on the matter and CARICOM will be contacted so it can encourage a public inquiry into the use of such armaments at the protest.

He was addressing residents of the community on Monday morning.

“All of you that have been affected, those who have been hit deliberately by these projectiles have a case against the state,” he said. “There are some 70 plus lawyers in Dominica, find one of them and file your case against the government. You have six months to do so…”

He stated that he is in contact with Amnesty Internation and the UN agency that assists in human rights on the matter.

“I have been in touch with them and I am going to release the pictures of these armaments …,” he stated.

Behanzin noted that he wants a UN team to come to Dominica to take evidence from the people of Salisbury.

“We will write CARICOM and ask them to encourage the government of Dominica to hold a public inquiry into the incident of last week in Salisbury,” he said.

According to Behanzin, tear gas used by the police during the protest was expired and outdated.

“Tear gas as I describe it, which was used in the 1800’s, has a shelf life of five years after manufacture,” he revealed, while he showed the residents a tear gas canister which, he said, the markings showed were manufactured in 2004.

“What I discovered is that when tear gas is more than five years past its manufactured date, it should not be used on any operation,” Behanzin remarked. “Secondly on the canisters themselves the warning states, apart from the four years, five years to be used it operation, it said it cannot even be used for training purposes after six years.”

Behanzin showed residents another canister, which he stated that the manufacturer said after five years the chemicals become toxic.

“The fact that they are old, means that they are toxic,” he said. “How toxic depends on the molecular structure of the individual, so we have no idea.”

Behanzin said some of the canisters have already left Dominica “to protect their integrity.”

He is seeking to establish who authorized the use of the expired tear gas at the protest, who he pointed out affected not only protesters, but the police themselves.

He also wants the government to be clear on how many more expired and outdated armaments are in store and what programs are in place to have them destroyed.

Last week Salisbury was rocked by a massive demonstation. Protesters said the community has been neglected by the government and roads, especially farm access roads, are in terrible conditions.

The protest, which included a blocking the main highway in the area, was eventually dispersed by the police using tear gas. 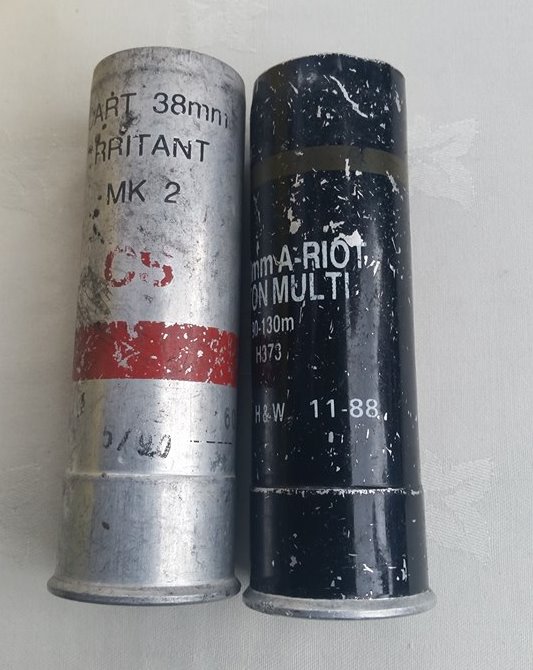