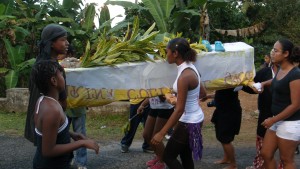 On Wednesday afternoon Dominicans converged in Bataca in the Kalinago Territory for the final event of the Carnival season called tewey vaval, or simply vaval.

A box containing an effigy of Carnival, which everyone called vaval, was paraded through the streets in a mock funeral procession. This was accompanied by singing, dancing and the playing of la peau kabwit drums.

In the evening the box was burnt symbolizing the end of Carnival for the year.